The former top PC maker had launched the Slate6 VoiceTab, alongside the Slate7 VoiceTab voice-calling tablet in February. 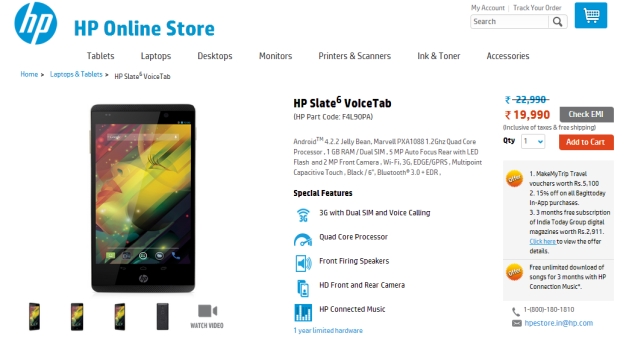 The HP Slate6 VoiceTab supports dual-SIM functionality (one regular, one Micro-SIM), with both SIM cards slots supporting 3G connectivity. It comes with 16GB of inbuilt storage, which is further expandable up to 32GB via microSD card. The HP Slate6 VoiceTab sports a 5-megapixel rear camera and a 2-megapixel front camera with HD video recording support. It comes with a 3.5mm audio jack, a Micro-USB port, and stereo FM radio.

Connectivity options include Bluetooth 3.0 EDR, 802.11b/g/n Wi-Fi and GPS. The HP Slate6 also comes with a G-sensor, gyroscope, e-compass, ambient light sensor, and proximity sensor. The Slate6 is powered by a 3000mAh battery, which is rated at up to 10 hours of talk time, and 7 hours of video playback time by HP.