The Android-based Slate6 VoiceTab is now available at the company's official online store with the new price tag of Rs. 15,990, down from Rs. 22,990 launch price.

Earlier in May, the company slashed the price of the device to Rs. 19,990. Notably, this is the second price cut of the Slate6 VoiceTab in less than two months.

The former top PC maker had launched the Slate6 VoiceTab, alongside the Slate7 VoiceTab voice-calling tablet in February. 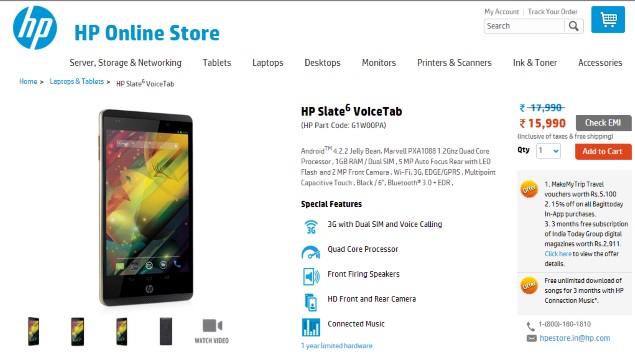 The HP Slate6 VoiceTab supports dual-SIM functionality (one regular, one Micro-SIM), with both SIM cards slots supporting 3G connectivity. It comes with 16GB of inbuilt storage, which is further expandable up to 32GB via microSD card. The HP Slate6 VoiceTab sports a 5-megapixel rear camera and a 2-megapixel front camera with HD video recording support. It comes with a 3.5mm audio jack, a Micro-USB port, and stereo FM radio.

Connectivity options include Bluetooth 3.0 EDR, 802.11b/g/n Wi-Fi and GPS. The HP Slate6 also comes with a G-sensor, gyroscope, e-compass, ambient light sensor, and proximity sensor. The Slate6 is powered by a 3000mAh battery, which is rated at up to 10 hours of talk time, and 7 hours of video playback time.