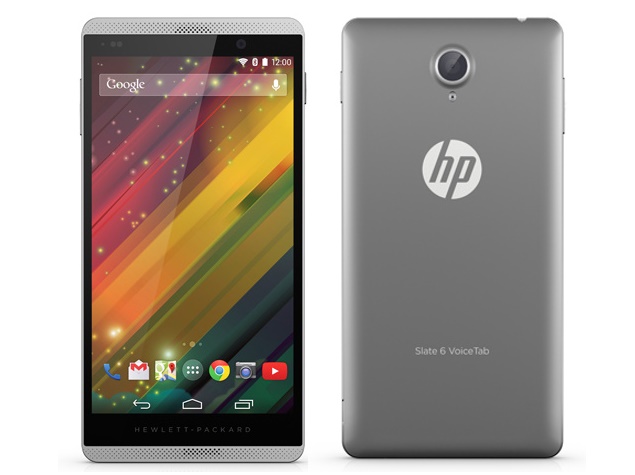 The HP Slate 6 VoiceTab II is a dual-SIM device that supports Micro-SIM (3G) and Mini-SIM (2G) cards, and runs Android 4.4.2 KitKat out-of-the-box. The device is up for purchase via the company's online store with estimated delivery time of one week.

As the name suggests, the Slate 6 VoiceTab II features a 6-inch HD (720x1280 pixels) IPS display. It is powered by a 1.2GHz quad-core Marvell PXA1088 SoC coupled with 1GB of RAM, just like the predecessor Slate 6 VoiceTab.

The Slate 6 VoiceTab II boasts of an 8-megapixel rear facing camera with flash, and a 2-megapixel front facing camera. The built-in storage on the device is 16GB, which is further expandable via microSD card (up to 32GB).

Connectivity options on the Slate 6 VoiceTab II include Wi-Fi, Bluetooth 3.0 with EDR (Enhanced Data Rate), GPS/ A-GPS, and Micro-USB. It packs a 3000mAh Li-ion battery, which is rated to deliver up to 10.5 hours of talk time on 3G and 13.5 hours on 2G. The device measures 165.1x83.2x8.98mm and weighs 160 grams. The listing on the company site was first spotted by Fonearena.

The 64-bit Windows 8.1-based HP Envy x2 13t comes in two screen resolution options, HD (1366x768 pixels) or full-HD (1920x1280 pixels), while the HP Envy x2 15t comes in only full-HD option. Both the 13.3-inch and 15.6-inch models feature a WLED-backlit IPS touchscreen display and a Microsoft Surface Pro 3-like kickstand at the back, apart from the bundled detachable Wireless Bluetooth backlit keyboard.

Note: We are treating the HP Slate 6 VoiceTab II as a smartphone, as SIM-based voice-calling devices with screen sizes less than 7 inches are defined by us as smartphone-tablet hybrids or phablets.