Honor View 10, the global variant of the Honor V10 that was launched in China in November, has had its price in India revealed. The Honor View 10 price in India has been set at Rs. 29,999, which is rather exceptional for the specifications the smartphone is offering. The smartphone will go on sale exclusively via Amazon India from 12am IST on Monday, January 8, and registrations are now open on the e-commerce site. The smartphone will be bundled with a 9v-2Ampere Quick charger, standard USB Type-C cable, a protective case, and a pre-attached screen-guard.

Speaking on the launch, P Sanjeev, Vice-President Sales, Huawei India-Consumer Business Group, said, "The Honor View 10 also follows our commitment towards the Indian market and has been priced lower than the global variant. Marked as the true AI device, the Honor View 10 will be the most affordable AI device available for the Indian consumer."

The Honor View 10 features a dual rear camera setup, Android 8.0 Oreo, an 18:9 display, and a flagship-level SoC with its own NPU (neural processing unit) for AI-based tasks. These AI-based features on the Honor View 10 include Facial Unlock technology, which is said to support payment-level authentication, and unlock in 400ms. For 3D face reconstruction, it uses sub-millimetre reconstruction accuracy, and can deliver a 300k-pointcloud reconstruction in 10 seconds. 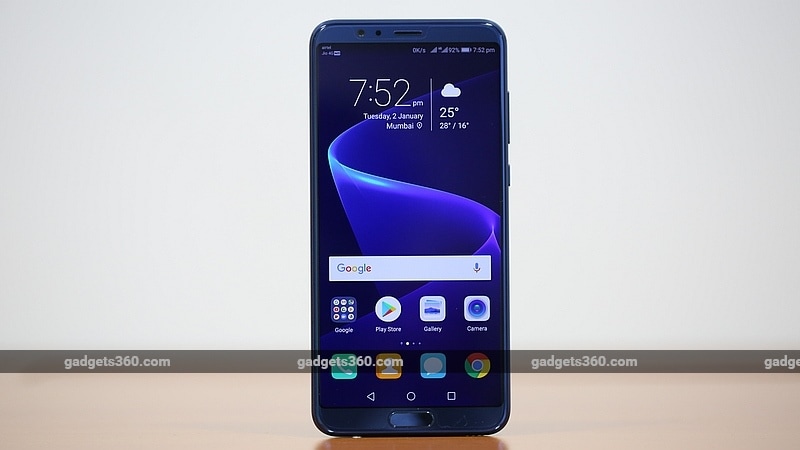 Other AI based features on the Honor View 10 include an AI-accelerated translator and Smart Tips, apart from intelligent scene and object recognition, as well as motion detection that will adjust camera settings. The AI-powered Portrait mode for selfies is also being outed.

The rear camera setup on the Honor View 10 sports two sensors - one 16-megapixel RGB sensor and the other a 20-megapixel monochrome sensor, complete with an f/1.8 aperture, PDAF, dual-LED flash. The Honor V10 bears a 13-megapixel sensor with an f/2.0 aperture. Inbuilt storage on the smartphone is 128GB, which can be expanded via microSD card (up to 256GB) in a hybrid dual-SIM configuration.

Connectivity options on the Honor View 10 include 4G VoLTE, dual-band (2.4GHz + 5GHz) Wi-Fi 802.11ac, Bluetooth v4.2, Infrared, GPS/ A-GPS, NFC, USB Type-C (2.0), and a 3.5mm headphone jack. Sensors on board include accelerometer, ambient light sensor, digital compass, gyroscope, and a proximity sensor. It bears a fingerprint sensor on the home button. It measures 157x74.98x6.97mm and weighs 172 grams. The smartphone is powered by a 3750mAh battery that's rated to deliver up to 23 hours of talk-time on 3G, and 22 days of standby time with - it is complete with 5V/ 4.5A fast charging support.