Honor V30 will sport a triple camera setup, a previous teaser had revealed.

Honor V30 is scheduled to launch on November 26 in China and the leaks are teasers simply keep pouring inHonor has been constantly teasing about the 5G connectivity on the Honor V30 for a while now and had teased it multiple times in the past. The Honor V30 will be the first V-series smartphone to sport 5G. That's not all - the smartphone also allegedly stopped by Geekbench, tipping a few key internal components, as well as posting a good score. The Chinese smartphone manufacturer also teased the V30's powerful video shooting features. This new smartphone is said to feature a 'cine' lens for better video recording.

The Honor V30 was recently spotted on Geekbench which revealed few key specifications of the device. This was first reported by DroidShout. Geekbench results tip the smartphone will be running a Huawei HiSilicon Kirin 990 5G SoC clocked at 1.95GHz. This base frequency is higher than the regular Kirin 990 SoC which is clocked at 1.86GHz. The smartphone is also said to have 8GB of RAM onboard. We can also see that the device will run Android 10 out-of-the-box. We can expect it to run Honor's Magic UI on top. 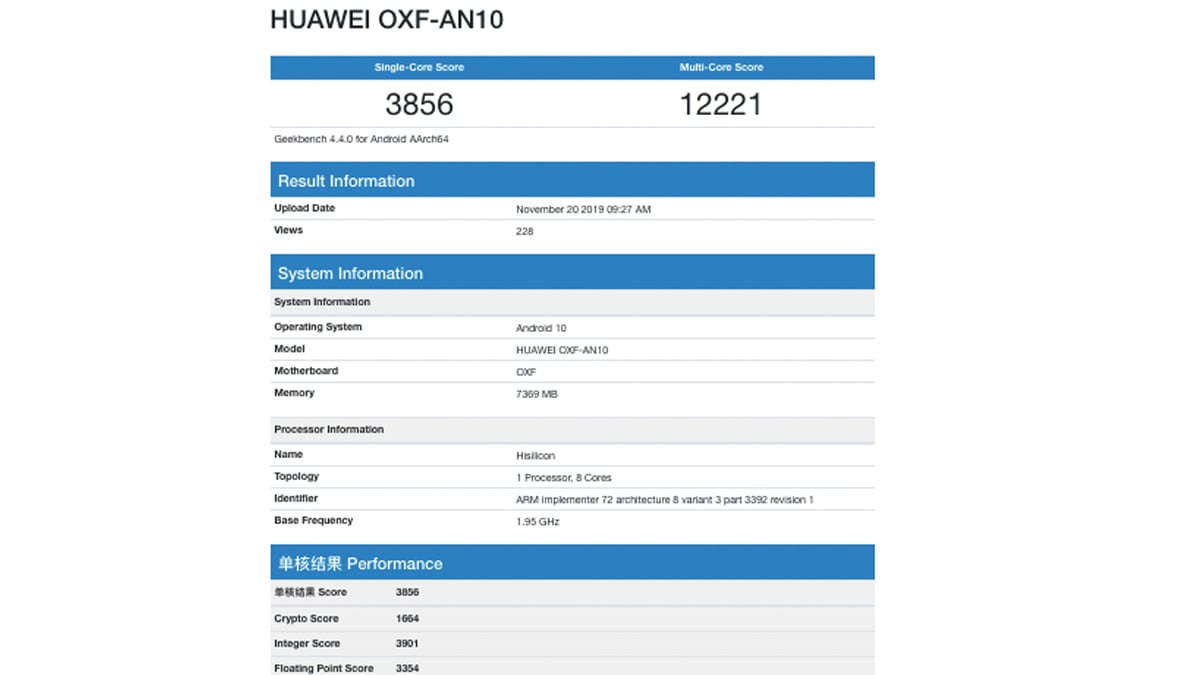 The Honor V30 bears the Huawei OXF-AN10 model number and has managed to score 3,856 and 12,221 in Geekbench's single-core and multi-core tests. As for the cameras, the Honor V30 will sport a rectangular camera module at the back similar to one seen on the Samsung Galaxy M30s. This module will house a triple camera setup along with an LED flash. The Honor V30 is also teased to sport a new camera Matrix algorithm and sport a cine lens just like the one seen on the Huawei Mate 30. This should help give the Honor V30 an edge when it comes to video recording.

Previous rumours suggest that the smartphone will sport a 60-megapixel primary camera and a dual-camera selfie setup positioned in the hole punch of the display. Renders of the upcoming Honor V30 had also leaked out revealing the complete design of the smartphone including the hole-punch display and the side-mounted fingerprint scanner.

With the product launch a few days away, we won't have to wait for long to find out more about the Honor V30. However, it'll be interesting to see if the company launches this smartphone in India.

Further reading: Honor, Honor V30
Aditya Shenoy Email Aditya
Aditya Shenoy reviews smartphones, wearables, headphones and speakers for Gadgets 360, out of Mumbai. Aditya is a reviewer for Gadgets 360 and has written extensively about smartphones, software updates, and upcoming devices. Aditya is available on Twitter at @adishenoy, and you can mail him at adityashenoy@ndtv.com, so please send in your leads and tips. More
Facebook Dating Gets Support for Facebook, Instagram Stories
Redmi K30 5G Live Images Leak, 3C Certification Tips 30W Fast Charging Support