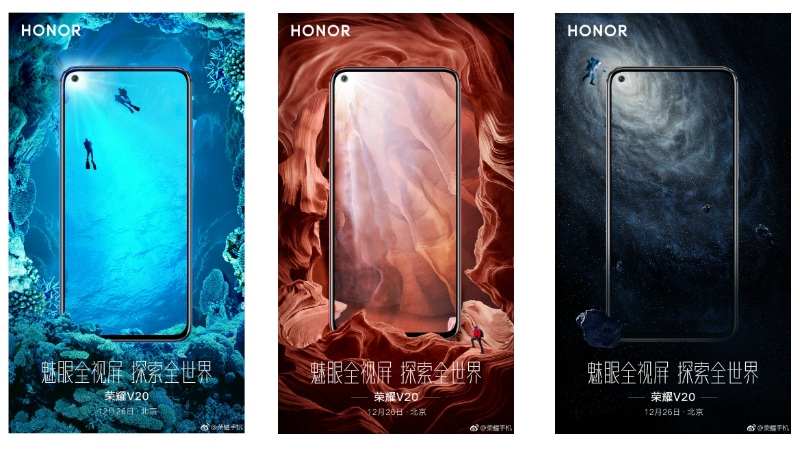 Honor V20 aka View 20 is the Huawei sub-brand's latest smartphone, announced earlier this week at an event in Hong Kong. However, Honor is hush-hush about most details around the Honor V20, details which it will reveal at the official launch in China on December 26, followed by a global launch for the View 20 in Paris on January 22. Soon after the announcement, Honor has gone ahead and released some teaser images of the Honor V20 that show off the front of the smartphone. It is seen to sport an almost-bezel-free design with a tiny selfie hole on the top left corner.

In a post on Honor's official Weibo account, the phone maker revealed the front design of the Honor V20 in close-up shots, something that it did not do at the announcement earlier this week. The front of the smartphone is seen to sport nothing but a small display hole - for the selfie camera - on top and a thin bezel at the bottom. Honor has previously announced that the selfie hole would have a diameter of 4.5mm.

Additionally, three differently-coloured teasers suggest that the V20 aka View 20 might be launched in three colour variants. Honor is expectedly touting its extremely high screen-to-body ratio as the major highlight, however hasn't specified the exact percentage.

The design is not the only good thing about the Honor V20. It sports a first-of-its-kind 48-megapixel rear Sony IMX586 camera sensor, with features including a 1/2.0-inch CMOS sensor, 4-in-1 Light Fusion, 4 times sensor HDR, and certain AI functionality.

Other than that, the phone is powered by a 7nm octa-core HiSilicon Kirin 980 SoC. As for its build quality, the Honor V20 is built using 5-axis ring dispensing technology, 0.1mm precision assembly, and sports a customised camera lens. Next, it features Honor's latest Link Turbo technology, which combines Wi-Fi and LTE connections to offer the best optimal speeds. One of the older teaser images suggests that the phone might get GPU Turbo gaming technology.