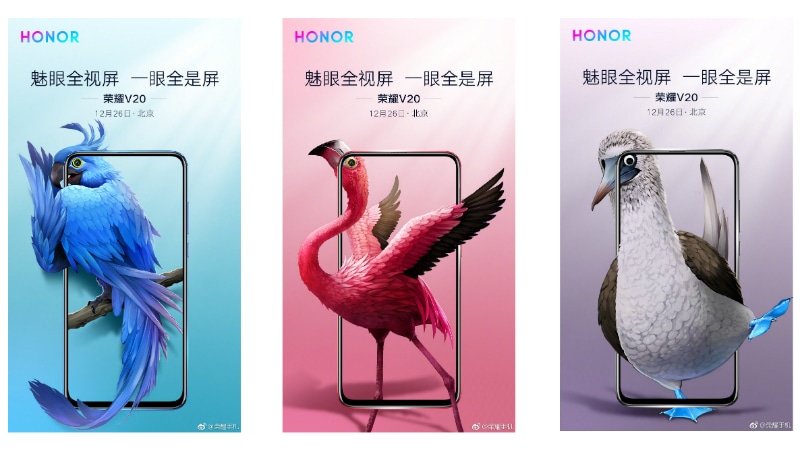 Honor V20 is expected to arrive in Blue, Gray, and Red colour options.

Honor V20 aka Honor View 20 is the latest flagship level smartphone from the Huawei sub-brand, and it will be officially unveiled later this month. To recall, it was first announced earlier this week, with official launch scheduled for December 26 in China. The Honor View 20, which will be the global variant of the Honor V20, will be launched in Paris on January 22. With Honor having teased its most ambitious smartphone yet, the Internet is filled with speculation and leaks around the handset. The latest of these happens to be a live image of the Honor V20 retail box, which has now been spotted online showing the frontal design of the phone. It has also been teased by Honor on social media again, confirming doubts around the colour variants of the upcoming smartphone which is Honor's first with a display hole for the selfie camera.

A post on Weibo has given us a look at what is allegedly the retail box of the Honor V20 aka Honor View 20 with the phone in it. There appear to be no additional details than what Honor has teased or showcased previously. The live image shows a wallpaper reminiscent of Huawei's custom EMUI software that will be based on top of Android 9.0 Pie.

Additionally, Huawei sub-brand Honor has once again posted three more teasers of the Honor V20. While they show only the front of the smartphone, the colour schemes of the teasers confirm that the smartphone will indeed launch in Blue, Gray, and Red colour options. The teasers also confirm the December 26 launch in China.

A recent report claimed the Honor V20 price is estimated to be CNY 3,000 or about Rs. 31,300. We can expect a similar price tag with the Honor View 20 launches in India

To recall, Honor has already confirmed that the smartphone will sport a 48-megapixel Sony IMX586 rear camera sensor, one of the first of its kind. The rear camera will come with features including a 1/2.0-inch CMOS, 4-in-1 Light Fusion, 4 times sensor HDR, and AI capabilities. The phone will be powered by the latest octa-core HiSilicon Kirin 980 SoC. A report claims the phone will get 8GB of RAM and 128GB of UFS2.1 internal storage.