Honor Magic V has a specially-designed waterdrop hinge claimed to be the slimmest among foldable phones. 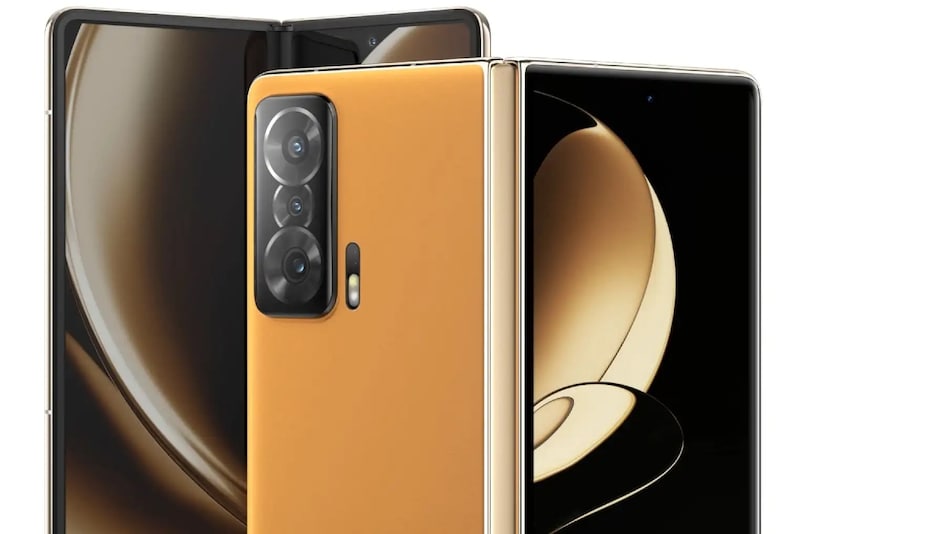 Honor Magic V foldable smartphone has been launched in China. The feature-loaded handset becomes the first foldable phone to come with Qualcomm's flagship Snapdragon 8 Gen 1 SoC. It also comes with a separate security chip, a triple rear camera setup, two hole-punch front cameras (one on the outside and one on the inside), and a specially-designed waterdrop hinge technology that is claimed to be the slimmest among foldable phones. Honor also unveiled Magic UI 6.0 that brings new software-based customisations for a seamless experience on Honor devices.

The dual-SIM Honor Magic V runs Android 12-based Magic UI 6.0 and sports a 7.9-inch foldable flexible OLED inner display (1,984x2,272 pixels) with a 90Hz refresh rate. The screen has a 10.3:9 aspect ratio, HDR10+ certification, 100 percent DCI-P3 wide color gamut, and reflectivity of less than 1.5 percent, as per Honor. The company also says that the smartphone uses a new generation of magnetron nano-optical film to reduce the screen reflection and is the first foldable smartphone to receive the IMAX Enhanced certification.

Honor says that the advanced waterdrop hinge technology of the Honor Magic V is the slimmest among foldable products in the market. It is said to be crafted with high-strength titanium alloy, zirconium liquid metals, and high-strength carbon fibres. Honor says it has 213 parts and has been tested 200,000 times.

Under the hood, the Honor Magic V has a Qualcomm Snapdragon 8 Gen 1 5G SoC, and it is the first foldable phone to come with the flagship chipset. There is an intelligent cooling system that comprises third-generation graphene and an AI intelligent thermal management system to keep the temperature of the phone under control, as per Honor. The foldable phone is offered with 12GB of RAM and up to 512GB storage.

Honor Magic V is equipped with a dual-security system for improved security for passwords and biometrics like fingerprints. It features symmetrical two-speaker stereo system with DTS:X Ultra Technology. The smartphone packs a 4,750mAh battery with support for 66W Honor SuperCharge charging technology. It is claimed to juice up the handset from 0 to 50 percent in 15 minutes.

Honor Magic UI 6.0 has made its debut on the Honor Magic V and is claimed to offer enhanced features with more customisations. The skin comes with Honor's AI Engine called Magic Live that acts as a personal assistant and learns through context awareness as well as profile prediction. It can set travel reminders such as check-in times and boarding gate updates. On Honor Magic V, the Honor Magic UI 6.0 offers support for multi-windows, allowing the screen to split into two windows in addition to two floating windows. Its AI Smart Intelligent System automatically detects and recommends content for multi-windows based on usage.

Xiaomi India speaks exclusively to Orbital, the Gadgets 360 podcast, on their plans for 2022 and pushing for 120W fast charging with the 11i HyperCharge. Orbital is available on Spotify, Gaana, JioSaavn, Google Podcasts, Apple Podcasts, Amazon Music and wherever you get your podcasts.
Affiliate links may be automatically generated - see our ethics statement for details.
Advertisement