Honor 8X is expected to sport a waterdrop display notch.

After being spotted on TENAA, the Honor 8X's existence has now been confirmed by the company with an official teaser. The teaser poster claims that the smartphone will 'surpass limits', and will be 'beyond imagination'. This could be hinting at more screen-to-body ratio, with the TENAA image leak also hinting at a waterdrop display notch in the front and a huge 7.12-inch display. This could also mean more processing power and RAM on the Honor 8X, but it is all speculation at this point in time.

The teaser poster has been released on social networking site Weibo and we expect to see more teasers revealing features and specifications of the Honor 8X regularly moving forward. There is no confirmation on arrival date, pricing, or specifications yet. To recall, the predecessor Honor 7X was launched in October last year, and the Honor 8X could arrive around the same time this year as well.

Leaks suggest that the Honor 8X will sport a waterdrop display notch, with vertically stacked dual rear cameras and a fingerprint sensor placed at the back. 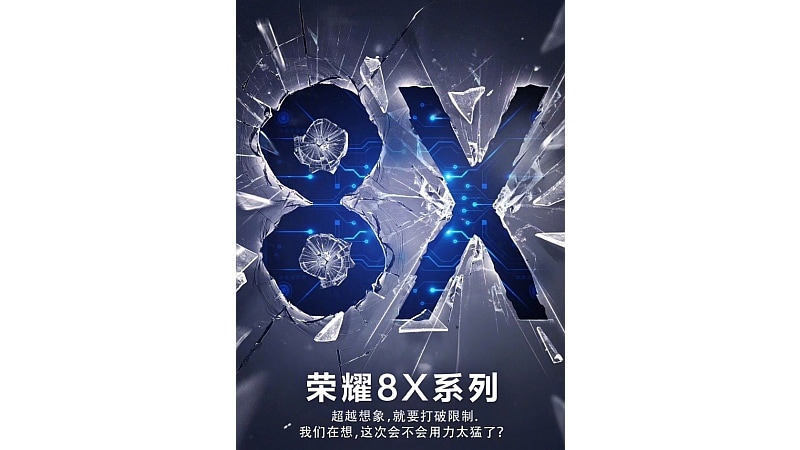 As mentioned, specifications have been tipped on TENAA and the Honor 8X is expected to run Android 8.1, and have a huge 7.12-inch full-HD+ (1080x2244 pixels) TFT display with an 18.7:9 aspect ratio. It will be powered by an octa-core SoC clocked at 1.8GHz, coupled with 4GB of RAM. Internal storage should be at 64GB, further expandable via microSD card (up to 256GB).

The Honor 8X is listed to sport a dual rear camera setup with a 16-megapixel primary sensor and a 2-megapixel depth sensor. It sports an 8-megapixel selfie camera as well. There is tipped to be a 4,900mAh battery under the hood. Dimensions of the Honor 8X are listed to be 177.57x86.24x8.13mm and weight is 210 grams.

Further reading: Honor
Tasneem Akolawala Email Tasneem Tasneem Akolawala is a Senior Reporter for Gadgets 360. Her reporting expertise encompasses smartphones, wearables, apps, social media, and the overall tech industry. She reports out of Mumbai, and also writes about the ups and downs in the Indian telecom sector. Tasneem can be reached on Twitter at @MuteRiot, and leads, tips, and releases can be sent to tasneema@ndtv.com. More
Logitech MX Vertical With 'Natural Handshake' Design, Ergonomic Build Launched
Samsung Galaxy Note 9 Durability Test Reveals an Odd Surprise