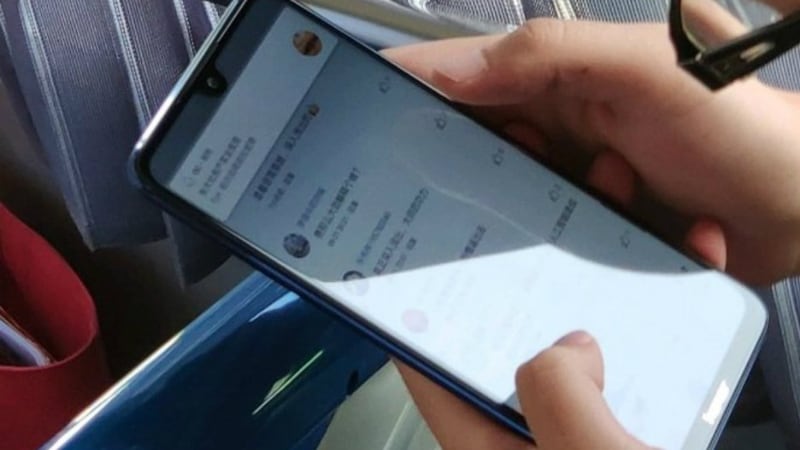 Honor 8X may sport a vertical dual camera setup at the back.

After being certified on TENAA, the Honor 8X was officially confirmed by Huawei's sub-brand Honor, and its arrival is pegged as 'coming soon'. Now, the smartphone has been spotted in the wild, and based on this photo, it is being speculated to be very similar to Huawei's Mate 20. The upcoming top-end smartphone of Huawei is expected to launch at IFA 2018 in three variants, with no details on an arrival date yet for the Honor 8X.

The Honor 8X was spotted in use on a bus, and pictures were posted on Weibo. The smartphone is seen sporting a waterdrop-shaped notch, and a slight chin at the bottom with the Honor branding. This design is nearly similar to what is seen on the leakedHuawei Mate 20 series so far, with the large display size, however the most premium variant is expected to sport a notchless display, while the Mate 20 Lite version is expected to sport a wide notch. Huawei is known to repackage its devices and sell them at lower prices under its Honor brand, and with the Honor 8X, it is suspected to do the same.

The company confirmed the Honor 8X in a teaser poster, and claimed that the smartphone will 'surpass limits', and will be 'beyond imagination'. Its big USP is expected to be its huge 7.12-inch display, its waterdrop display notch, vertically stacked dual rear cameras, and a rear fingerprint scanner as well.

As mentioned, the Honor 8X was also spotted on TENAA recently, and it suggested Android 8.1 Oreo OS, a 7.12-inch full-HD+ (1080x2244 pixels) TFT display with an 18.7:9 aspect ratio, and an unnamed octa-core SoC clocked at 1.8GHz. It could be packing a 4GB RAM, 64GB internal storage that is further expandable via microSD card (up to 256GB). Its dual camera setup will have one 16-megapixel primary sensor and a second 2-megapixel depth sensor. It should sport an 8-megapixel selfie camera, pack a 4,900mAh battery, sport 177.57x86.24x8.13mm dimensions, and weigh 210 grams. Sensors onboard the smartphone should include accelerometer, ambient light sensor, fingerprint sensor, and proximity sensor. Lastly, connectivity options on the Honor 8X are tipped to include 4G VoLTE, Wi-Fi, Bluetooth, GPS, a 3.5mm headphone jack, and USB port.

Fortnite v5.30 Patch Brings Peformance Improvements to Xbox One and Nintendo Switch
Xbox All Access May Offer a Console, Games, and Live at $35 a Month