Honor 8A is set to debut in China on January 8. The new model, as its name suggests, will be the successor to the Honor 7A that was launched in China back in April last year. Huawei sub-brand Honor on Thursday teased the launch of the Honor 8A via Weibo. The upcoming smartphone is expected to come with up to 64GB of onboard storage and sport an 8-megapixel selfie camera. A TENAA listing of the Honor 8A that surfaced last month hinted at the presence of Android Pie on the new smartphone.

As per the teaser image that Honor released through one of the official Weibo accounts on Thursday, the Honor 8A will arrive in China on January 8 along with 64GB of onboard storage option. The formal teaser also suggests that the smartphone could sport an 8-megapixel selfie camera and come with an octa-core SoC.

The teaser outlines the design of the Honor 8A that appears to have a waterdrop-style display notch. Also, the model of a building showed in the teaser image reveals that there will be stereo speakers. 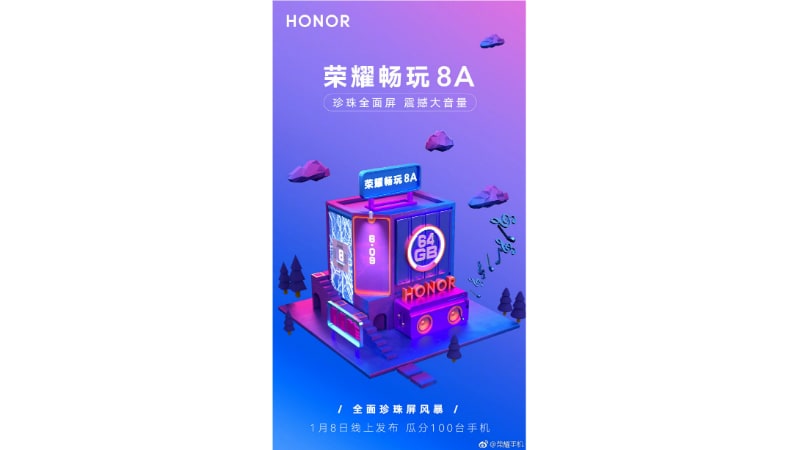 If we believe all that emerged on TENAA last month, the Honor 8A will run Android 9.0 Pie out-of-the-box. The handset was found to have a 6.08-inch HD+ (720x1560 pixels) LCD panel and come with an octa-core 2.2GHz SoC, coupled with 3GB of RAM. While the front panel of the Honor 8A is expected to have an 8-megapixel selfie camera, its back panel is rumoured with a 13-megapixel camera sensor.

The TENAA listings also suggested that the Honor 8A could come with 32GB and 64GB inbuilt storage options along with microSD card support (up to 512GB). The smartphone could also have a Face Unlock feature, though none of the images available on TENAA confirmed a fingerprint sensor. The listings also confirmed a 2,920mAh battery and 156.28x73.5x8mm of dimensions.

As we mentioned, the Honor 8A will be the successor to the Honor 7A that debuted in China back in April last year and was launched in India in May last year. The predecessor carried a starting price of CNY 799 in China (Rs. 8,999 in India). However, we are yet to confirm the price of the Honor 8A.

Further reading: Honor 8A, Honor
Jagmeet Singh Email Jagmeet
Jagmeet Singh writes about consumer technology for Gadgets 360, out of New Delhi. Jagmeet is a senior reporter for Gadgets 360, and has frequently written about apps, computer security, Internet services, and telecom developments. Jagmeet is available on Twitter at @JagmeetS13 or Email at jagmeets@ndtv.com. Please send in your leads and tips. More
Dormant Twitter Accounts Being Hacked to Spread IS Propaganda: Report
AMD Ryzen 3000 Series Said to Launch at CES 2019, With 16-Core Ryzen 9 CPU