Honor 7C is likely to debut in India on May 22. Huawei brand Honor on Monday evening sent out an invite for an event where the new smartphone is expected to be launched. While the venue and timing of the event are yet to be confirmed, the Chinese brand featured an image on the 'Save the Date' invite - specifying a new Honor 7 series launch. Additionally, an official teaser on Twitter suggests the new smartphone launch will be the Honor 7C. The latest development importantly emerges just before the launch of the Honor 10 that is taking place at 6:30pm IST in London later today, May 15.

The teaser posted by the official Honor India account on Twitter showcases two Honor units with thin bezels. Apparently, the two phones featured in the teaser are not two distinct models but just one model flipped horizontally to highlight a dual camera setup. It also includes a #LoveSeven hashtag that points to the new Honor 7 series launch. "We can't keep calm as the season to fall in love is here!! Stay tuned cause #LoveSeven is coming your way! [sic]" the tweet reads. 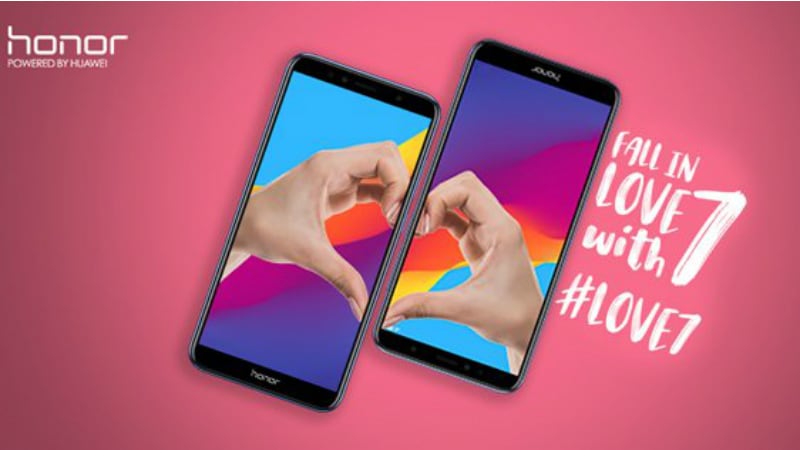 The dual-SIM (Nano) Honor 7C runs EMUI 8.0 on top of Android 8.0 Oreo and features a 5.99-inch HD+ (720x1440 pixels) IPS display with a 2.5D curved glass protection. Under the hood, the handset has an octa-core Qualcomm Snapdragon 450 SoC, coupled with 3GB of RAM. There is a dual rear camera setup that has a 13-megapixel primary sensor and a 2-megapixel secondary sensor, paired with an autofocus lens that has an f/2.2 aperture. On the front, the smartphone has an 8-megapixel sensor with a fixed focus lens sporting an f/2.0 aperture.

The Honor 7C has 32GB and 64GB storage options both expandable via microSD card. In terms of connectivity, the handset has 4G LTE, Wi-Fi 802.11 b/g/n, Bluetooth v4.2, GPS/ A-GPS, Micro-USB, FM radio, and a 3.5mm headphone jack. Sensors on board include an accelerometer, ambient light, and a proximity sensor. The smartphone also has a fingerprint sensor on the back. It packs a 3000mAh battery and measures 158.3x76.7x7.8mm.