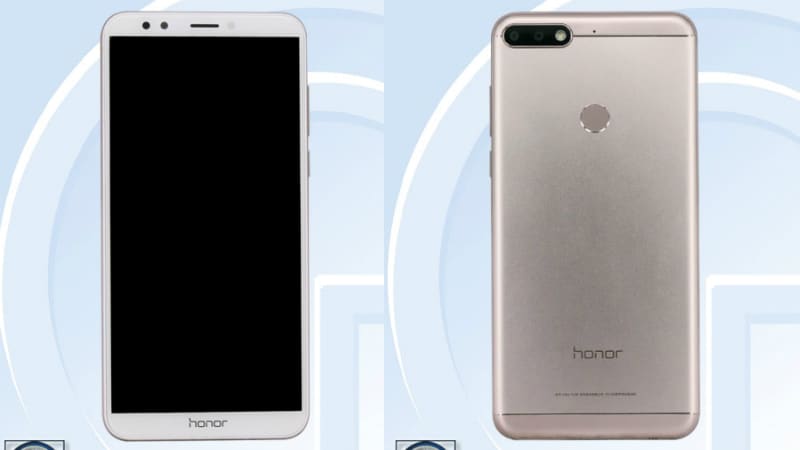 Honor 7C could be one of the upcoming smartphones Chinese brand Huawei is planning to launch. As per a TENAA listing, a new Honor handset with model number LND-AL30 will feature four cameras and a metal unibody design. Reports say that the new model may be the Honor 7C, which could be a watered-down variant of the Honor 7X. The brand's parent company is hosting an event during Mobile World Congress in Barcelona, where is has promised to launch new products.

The TENAA listing showcases the design of the new Honor smartphone but does not reveal much about the specifications. In the images, the smartphone appears to have a fingerprint scanner and a dual camera setup at the rear end. Meanwhile, on the front, we can see a display with 18:9 aspect ratio, which is similar to the Honor 7X's. When it comes to the camera, there are two inlays which suggest that there could be two cameras for selfies.

If the Honor 7C is a toned down variant of the Honor 7X, it will still have an upper-hand in terms of camera. While the Honor 7X has dual cameras, a 16-megapixel primary camera, and a 2-megapixel depth-sensing camera, like most other smartphones in the market, those are located on the back.

If the smartphone is indeed the Honor 7C, it will be a successor to the Honor 6C launched in 2017. Honor 6C is dual-SIM smartphone featuring a 5-inch HD (720x1280 pixels) AMOLED display and is powered by a 1.4GHz Qualcomm Snapdragon 435 processor paired with 3GB of RAM. It offers a 13-megapixel rear camera and a 5-megapixel selfie camera.

Currently, there is no information regarding the pricing and availability of the smartphone. Not much else is known about the handset, though since it is already spotted TENAA, we can expect to find out the specifications soon.