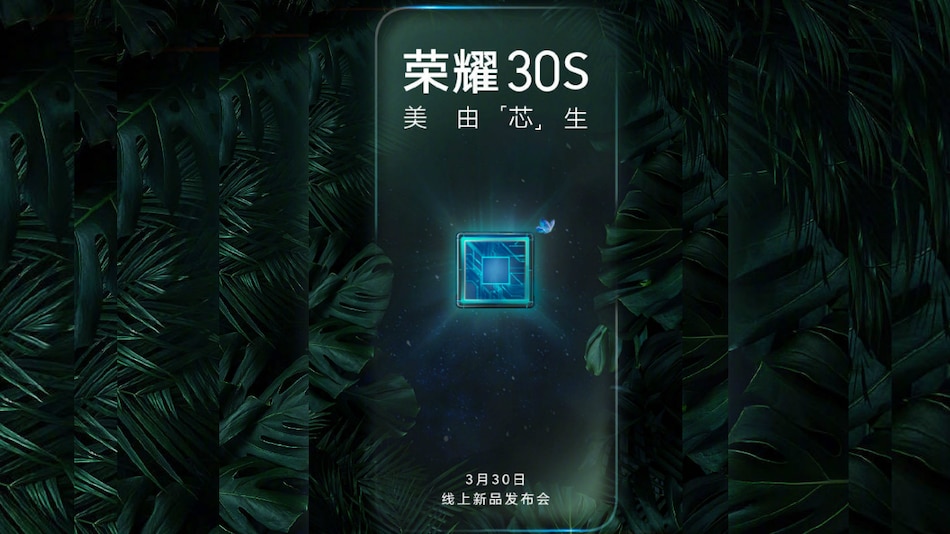 Honor 30S is set to launch in China on March 30. The phone has been rumoured for a while now, and it was expected to launch by the end of this month. The company has now confirmed the launch date in China via an official Weibo post. As per past leaks, the Honor 30S is tipped to be powered by the Kirin 820 5G chipset, sport quad rear cameras, and support 40W fast charging. The phone is expected to sport a rectangular-shaped module to house the four cameras at the back.

Huawei brand Honor has taken to Weibo to announce that the Honor 30S will launch on March 30. The phone is slated to launch in China for now, and its international availability is not known yet. The poster reveals little else about the phone, but there's a smartphone border in the background, and it suggests that the phone will sport a notch-less and bezel-less display.

Honor 30S will be the first to launch in the rumoured Honor 30 series. The Honor 30S has been spotted on China's 3C mobile certification site, and the listing suggests that the phone will support 5G. The listing also tips that it would support fast charging, and might also have four rear cameras. The Honor 30S is tipped to have 40W fast charging, with a 10V and 4A power configuration. As mentioned, it is rumoured to be powered by the Kirin 820 5G SoC . A separate render leak indicates that the four cameras will be placed inside a rectangular module, positioned on the upper left corner of the back panel. Three cameras will be aligned vertically, while one camera will sit on the side, below the flash module.