Four cameras and 3x optical zoom seem to be becoming the staple among phone makers. 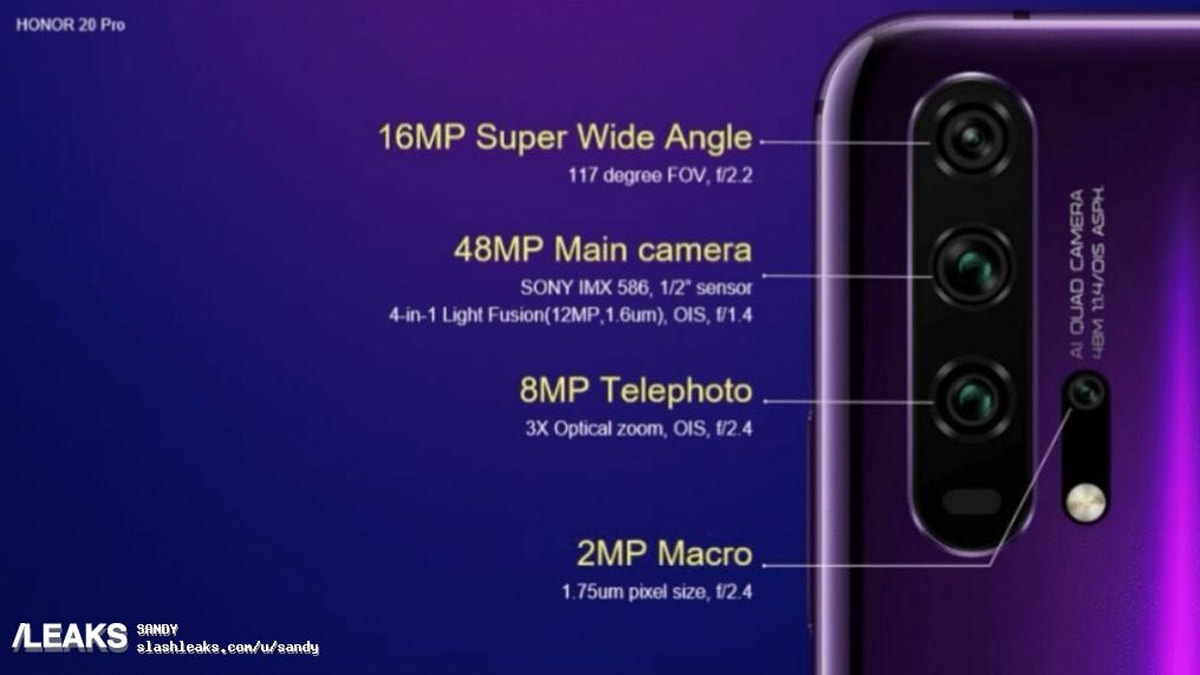 The Honor 20 series, which at the moment, includes the Honor 20 and Honor 20 Pro, are all set to launch on May 21. We've been hearing rumours about these phones for the past month or so and now, some new renders more or less confirm both the phone's rear camera setup. Both are tipped to feature four rear cameras with a primary 48-megapixel Sony IMX 586 sensor gracing both models.

The renders were posted on Twitter by Slashleaks contributor Teme (@RODENT950), one for the Honor 20 and another for the Honor 20 Pro. Starting with the Honor 20, this quad-camera setup includes a 48-megapixel primary sensor which is said to have a “4-in-1 Light Fusion” system, which will mostly likely save a 12-megapixel image by default. It's a 1/2-inch sensor with an aperture of f/1.8.

Above it, sits a 16-megapixel wide-angle lens with a 117-degree field of view (FOV) and an aperture of f/2.2. The image also shows a 2-megapixel depth sensor. The fourth camera is a 2-megapixel macro lens with a f/2.4 aperture, sitting on the right of the main camera cluster.

The Honor 20 Pro has a much more interesting setup. It has the same 16-megapixel wide-angle camera and 48-megapixel primary sensor, but the primary sensor here has optical stabilisation and a much larger aperture of f/1.4. The latter seems pretty impressive as till now, the largest aperture we've seen is f/1.5. This should make the Honor 20 Pro a good choice for low-light photography.

The depth sensor from the Honor 20 has also been replaced with a 8-megapixel telephoto sensor, which is said to have 3x optical zoom, OIS and an aperture of f/2.4. Lastly, it keeps the 2-megapixel macro lens. Teme also tweeted a sample photo, which was supposedly clicked with the Honor 20 Pro. It shows a sample shot with the main camera and another with a ‘AI Ultra Clarity Mode'.