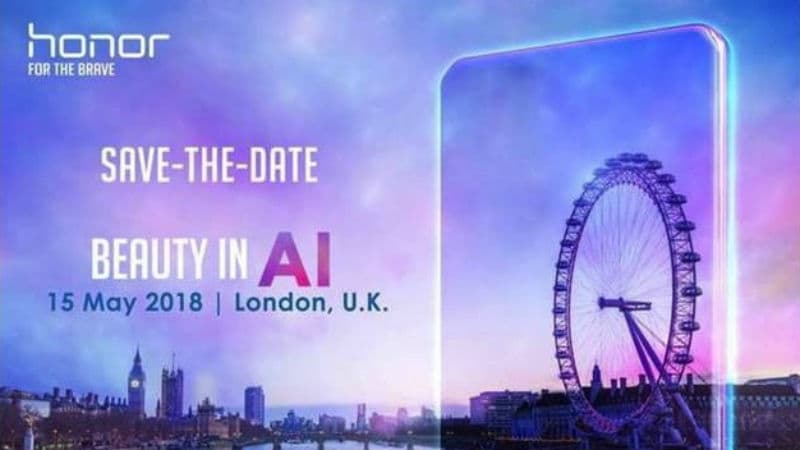 Huawei sub-brand Honor has scheduled a launch event in London on May 15 and all signs point towards the unveiling of the Honor 10 smartphone. The company has reportedly started to send out press invites for the event and the image reveals a few details of an upcoming smartphone. The Honor 10 is expected to arrive as a successor to the Honor 9 in the company's flagship lineup, sitting alongside the Honor View 10.

Honor usually unveils its new flagship smartphone in the second quarter of the year. However, the company might have decided to out its flagship earlier than usual. Unlike in 2017, when Honor 9 was announced in June, the Honor 10 might get unveiled a month earlier. While Samsung is also expected to launch its Galaxy Note 9 earlier than its usual release, companies such as LG is also expected to join the party soon.

As per a Digital Trends report, Honor is sending invitations to the media for a launch event that is scheduled on May 15. The event will take place in London, the UK, and will possibly to focus on a single device – the Honor 10. The invite comes with the caption 'Beauty in AI,' so it is highly likely that it will be the flagship smartphone, like the Huawei Mate 10 and Huawei P20 handsets. Notably, the invite contains a GIF which showcases a shutter icon closing to reveal the letters 'AI'.

As of now, not many details of the Honor 10 has surfaced, but the image of the smartphone in the invitation does not seem to indicate the notch feature, made popular after the iPhone X. As per a report in ITHome, the name Honor 10 was seen in a few unofficial documents, where the phone is listed as a 5.7-inch handset powered by the Kirin 970 processor. Keep an eye out for more details on this flagship smartphone from Honor.