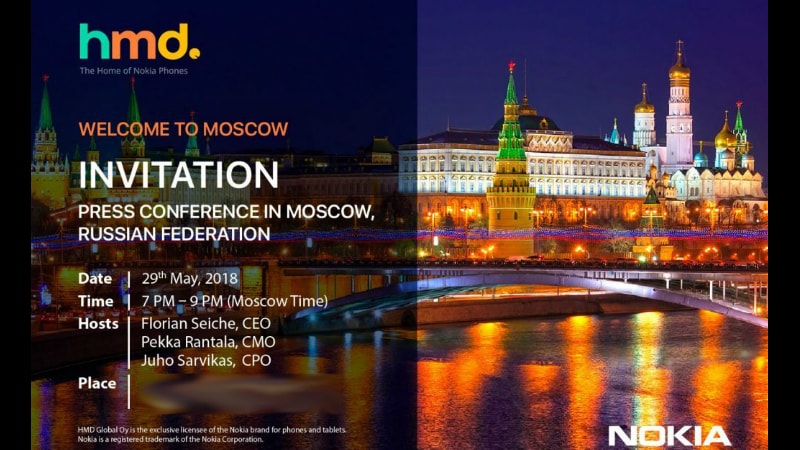 HMD Global has just announced an event in Moscow, Russia on May 29. The company's invite states that HMD Global's CEO Florian Seiche, CMO Pekka Rantala, and CPO Juho Sarvikas will be present. Even though the invite doesn't state what will be announced specifically, we largely expect the Nokia 2, Nokia 3, and Nokia 5 refreshes to be announced.

The invite holds a picturesque landscape in the background, indicative of the camera quality on the new phones. Furthermore, the teaser invite, according to Nokiapoweruser, reads, "Dear friends. We invite you to worldwide premiere new Nokia phones." This also indicates that the new smartphones will be launched globally at the event, and India could be one of the markets the smartphones will be made available simultaneously. This also means that new smartphones will be launched at the event, and not the ones that have already been launched in other countries. Nokia already sells most of its 2018 lineup in Russia, lending more weight that new smartphones are indeed coming on May 29. Furthermore, the invite reads 'Nokia phones' confirming that more than one smartphone announcement is going to be made in Moscow.

At MWC, HMD had confirmed that the refresh of Nokia 2, Nokia 3, and Nokia 5 were in the offing. Leaks surrounding the same are also picking up pace recently, and these three smartphones could indeed see the light of the day at the event on May 29. The Nokia 3.1 was spotted under testing recently, indicative of a close launch as well. However, this is pure speculation, and we recommend you to not take anything seriously till the official announcement.