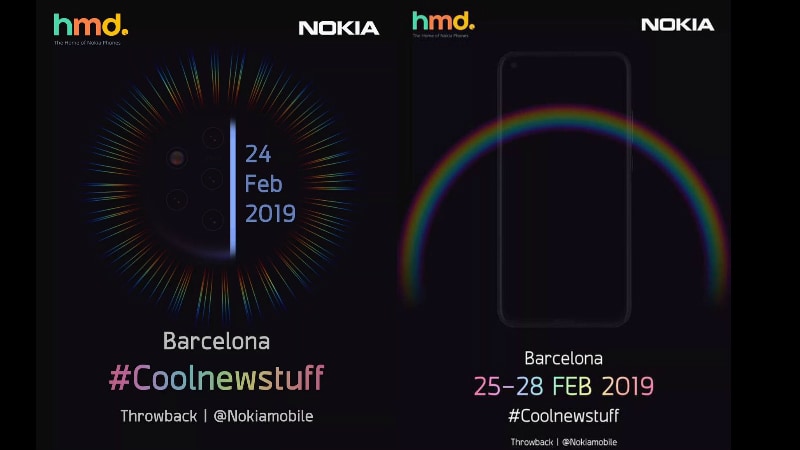 Nokia 9 PureView and Nokia 8.1 Plus teasers

HMD Global's Juho Sarvikas has already revealed that the company will host an event on February 24 at the Mobile World Congress (MWC), and now the purported teasers of the event have surfaced online, almost confirming that the Nokia 9 PureView is finally going to be revealed. The leaked teaser also seemingly corroborates the penta-lens camera setup expected to be present the Nokia 9, as per tidal wave of leaks. Furthermore, the second teaser hints at another smartphone set for launch, and it is seen sporting a punch-hole for selfie camera design, similar to the recently launched Samsung Galaxy A8s and Honor View 20. To recall, the unannounced Nokia 8.1 Plus smartphone was tipped to sport a punch-hole selfie camera, making it possible that we will see the announcement of Nokia 8.1 Plus at HMD's MWC event.

The purported new teasers for the HMD Global's MWC event have surfaced online, and one of them shows a portion of the penta-lens setup rumoured on the Nokia 9 PureView. The teaser shows about four camera lenses and a flash in the photo, but we expect the device to sport a total of five camera lenses, one flash, and another optical sensor whose purpose is still uncertain. The teaser also suggests that the setup at the back is going to be powered by Zeiss, as has been rumoured earlier. The leaked teaser was spotted on AndroidPure.

Furthermore, a separate teaser (leaked on Baidu) shows the front portion of an unannounced Nokia device, and the phone can be seen sporting a display hole for selfie camera design. In almost all of its leaks, Nokia 9 PureView has been sporting bezels on the top and bottom, so it is quite possible that this teaser is talking of another device, probably the Nokia 8.1 Plus. The recently leaked Nokia 8.1 Plus renders had shown the punch-hole selfie camera design. So, it is possible that HMD Global may launch this phone at the event as well.

The Nokia 9 PureView is expected to be the first PureView-branded Nokia phone from HMD Global after acquiring the PureView brand from Microsoft in 2018. Leaked specifications of the Nokia 9 PureView include a 5.99-inch QHD PureDisplay panel with HDR10 support, an in-display fingerprint sensor, Qualcomm Snapdragon 845 SoC, 6GB RAM and 128GB inbuilt storage. However, HMD Global may manage to use the Snapdragon 855 SoC, the current flagship mobile SoC from Qualcomm. On the software front, the phone will be based on the Android One platform and most likely run on Android 9 Pie operating system.

Render leaks of the Nokia 8.1 Plus suggest a dual camera setup at the back with Zeiss optics and a dual-LED flash module, and a 6.22-inch display.