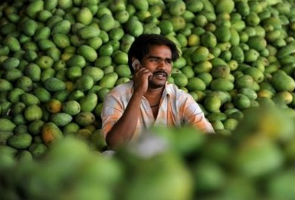 Highlights
Hundreds of millions of poor Indians who have no access to financial services could benefit from mobile banking, experts say, as cell phone use grows at breakneck pace.

Banking by phone could transform the workings of the rural economy, but the industry first needs to allay fears about transaction security and overcome low literacy levels and banks' limited reach in remote areas.

"The potential for mobile banking is enormous, but it will take its own pace to grow," Amit Ahire, analyst at Ambit Capital, told AFP.

One in 10 of the world's mobiles is sold in India, according to technology research specialists Gartner, and the country adds nearly 19 million new mobile subscribers every month, making it the fastest-growing market in the world.

Yet, at the same time, nearly half of the adult population still does not have a bank account.

Combining the two sectors will have benefits not just for consumers but the economy as a whole, analysts say, echoing India's central bank, which wants swathes of rural India brought into the formal financial system.

The Reserve Bank of India has allowed 39 banks to launch mobile banking services and recently raised the limit for the amount which can be paid through mobile phones 10-fold, to 50,000 rupees ($1,100).

Currently, just five percent of mobile phone subscribers are registered for the service and of them, a tiny 0.5 percent use it regularly, according to the Business Standard financial daily, quoting industry estimates.

"Growth is slower than expected but it is too early and lot of time and resources need to be spent to educate customers on usage and security," added Samaresh Parida, a director of mobile giant Vodafone Essar, which has a tie-up with ICICI Bank, India's largest private lender.

Indian banks and telecoms firms face a "significant learning curve", he said, predicting that mobile banking would evolve faster than its Internet equivalent as 3G phone services roll out across the country.

But while cut-throat competition has pushed call charges down to less than one cent a minute, web browsing charges remain high and the penetration of 3G smartphones still low.

"Mobile banking to most Indians is complex and too technical," said A.P. Hota, chief executive of National Payments Corporation of India, an apex body for mobile banking payments.

He said that to develop, the facility needs to become more visual and multi-lingual.
Comments