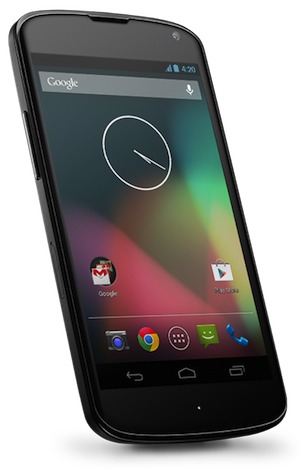 The devices announced Monday include the latest in Google's line of Nexus smartphones and a larger version of the 7-inch Nexus 7 tablet that the company began selling in July under the Nexus brand.

The Nexus 4 smartphone is being made by LG Electronics Inc. and features a minor update to Google's Android operating system, which now powers more than 500 million devices worldwide. A more comprehensive upgrade is expected next year.

The larger Nexus tablet is being made by Samsung Electronics Co. and features a display screen that measures 10 inches diagonally, about the same size as Apple Inc.'s top-selling iPad.

Google's introduction of a larger tablet comes less than a week after Apple announced it's making a smaller, less expensive iPad with a 7.9-inch display to compete against the Nexus 7 and Amazon.com Inc.'s Kindle Fire. The iPad Mini will be available in stores Friday.

Some analysts have questioned whether consumers will balk at the iPad Mini's $329 price for a device with 16 gigabytes of storage. Google is widening the price difference between the iPad Mini and its smaller tablet by lowering the price of a comparable Nexus 7 from $249 to $199. A Nexus 7 with 32 gigabytes of storage is being introduced for $249 in apparent effort to discourage even more people from buying the iPad Mini. It's still pricier than the Kindle Fire, which starts at $159 for a no-frills model.

The Nexus 7 tablets will continue to be sold at Google's Play store online as well as a list of other retailers that include GameStop, Office Depot, Office Max, Staples, Wal-Mart.

The Nexus 10 tablet with 16 gigabytes of storage will sell for $399. That's $100 less than the comparable version of the latest iPad, though the older iPad 2 is still available at that price. The Nexus goes on sale in Google's online store Nov. 13.

The Nexus 4 phone boasts a 4.7-inch screen, larger than Apple's recently released iPhone 5 and just slightly smaller than Samsung's flagship phone, the Galaxy S III. A 16-gigabyte model of the Nexus 4 will sell for $199 with a two-year contract to buy phone service and Internet access from T-Mobile. A contract-free version is available for $299 with 8 gigabytes of storage and $349 for the 16-gigabyte model.

Microsoft Corp. entered the tablet fray last week with the Surface, which runs on the newly released version of Windows. The operating system, called Windows 8, has been radically redesigned to appeal to people who want the utility of a personal computer coupled with the convenience of smaller mobile devices that rely on touch controls. More than 1,000 PCs and other devices are expected to run on Windows 8.

Microsoft had an event in San Francisco on Monday to launch its version of Windows 8 for smartphones. Google had hoped to upstage Microsoft's celebration by rolling out its latest gadgets at an event a few hours earlier in New York, but that got canceled because of Hurricane Sandy. The company, which is based in Mountain View, Calif., instead released details about the devices in a blog post.

Besides adding more hardware to its online store, Google is expanding its music library to include Warner Music Group's catalog. Warner had been the only holdout among the major music labels when Google began selling music a year ago to compete against Apple's iTunes stores. The company also said it will begin selling music in Europe beginning Nov. 13.