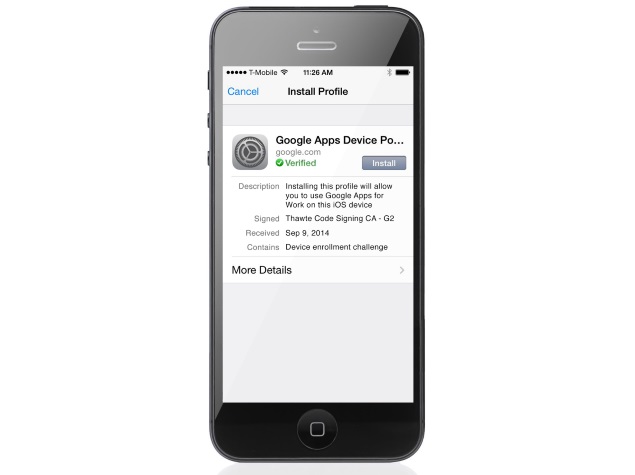 Google, soon after rebranding its decade-old Google Enterprise division as Google for Work, has announced a new device management feature for Apple devices called iOS Sync for Google Apps. Google says the feature will help deliver the 'increased security' needed to protect files, emails, documents and more on an iPhone or iPad.

The company in a blog post confirmed that the new iOS Sync feature has been integrated into the Gmail and Google Drive apps for iOS, so that users don't need to download an additional app to enable the device management feature. The newly announced iOS Sync feature will support iOS 7, 8 and, the recently announced devices iPhone 6 and 6 Plus.

The Google for Work blog post said, "Marvel and DC Comics, Star Wars and Star Trek, Emacs and VI - we all have our favorites. And then there's iOS and Android, each with dedicated fans. Regardless of which you prefer, there's no reason your device of choice should get in the way of your work. We're introducing iOS Sync for Google Apps giving you and your company the increased security needed to protect your files, emails, documents and more on your favorite iOS phone or tablet."

Google has listed the additional security options being rolled out with iOS Sync for Google Apps.

Notably, Google had rolled out its Android device management solution in May.

Last week, Google's Executive Chairman Eric Schmidt in a blog post titled 'Introducing Google for Work (the artist formerly known as Enterprise)' announced the new name for its enterprise division. "As of today, what was called Google Enterprise is now, simply, Google for Work. When we use the tools that make our lives easier-Google Apps, Maps, Search, Chrome, Android, Cloud Platform and more-work gets better. And that's what we're working on-the best of Google, now for work," Schmidt said.