The Samsung Galaxy M11 listing on Google Play Console indicated at a close to 6.1-inch display.

The phone will come with a hole-punch display

Samsung will soon launch an entry-level Galaxy M11 with a hole-punch display, if a new leak is to be believed. A new render, said to be the upcoming Samsung Galaxy M11, has been spotted on a Google Play Console listing along with a few specifications of the device. The Google Play Console Listing was spotted by a website called Techie Jerry, which shows the phone with a hole-punch display, with the front camera punched in the top-left corner of the screen and a rather thick chin at the bottom of the front panel.

The report says that the Samsung Galaxy M11 will have a 720x1560 resolution, and a pixel density of 280ppi. Although the screen size is not listed, based on the resolution and pixel density, we can calculate it as being close to 6.1-inches. According to the leak, the phone will be powered by a Qualcomm Snapdragon 450 SoC, paired with 3 GB of RAM and an Adreno 506 GPU. The leak also shows that the Samsung Galaxy M11 will come with Android 10, running Samsung's One UI Core 2.0. 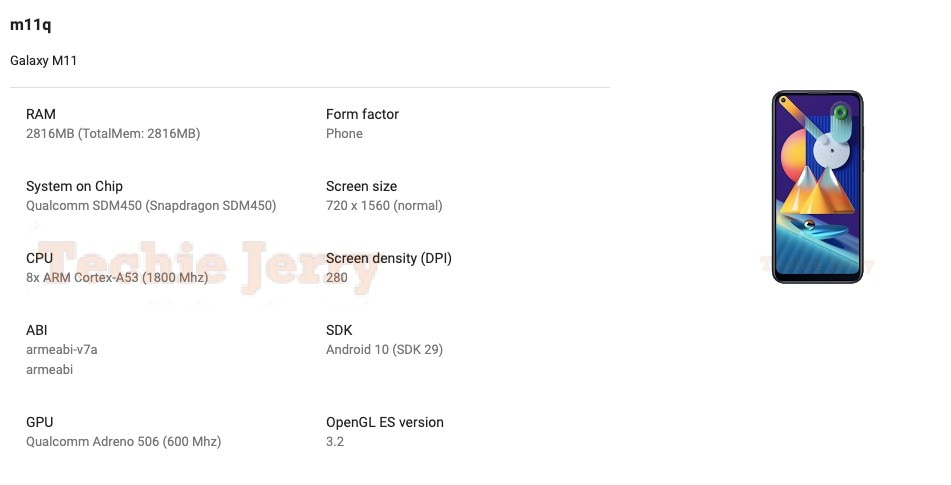 Initial reports of the Galaxy M11 being under development started coming in December 2019, which said that the phone would come with 32GB of internal storage.