Users made the most of the big discounts during the Black Friday sale last week - which extended over the weekend till Cyber Monday. Deep discounts on tech products saw users lapping up smartphones and tablets in huge numbers, and the newly released iPhone 7 and Google Pixel saw an increase in sale numbers - or specifically, new device activations. However, an analytics firm found out that the Google Pixel was a clear winner when it came to activations over the weekend, while the iPhone 7 lagged behind.

During the big weekend, Localytics data shows that Google Pixel phones outnumbered the latest Apple offering. The data revealed that Google Pixel activations went up to 112 percent compared to the average from the previous four weekends, while the iPhone 7 saw just 13 percent rise in activations over the weekend. Interestingly, the Samsung Galaxy S7 performed impressively as well, with a 36 percent jump in new activations compared to the normal rate. The 9.7-inch iPad Pro and iPad mini 2 activations increased by 24 percent and 19 percent respectively. 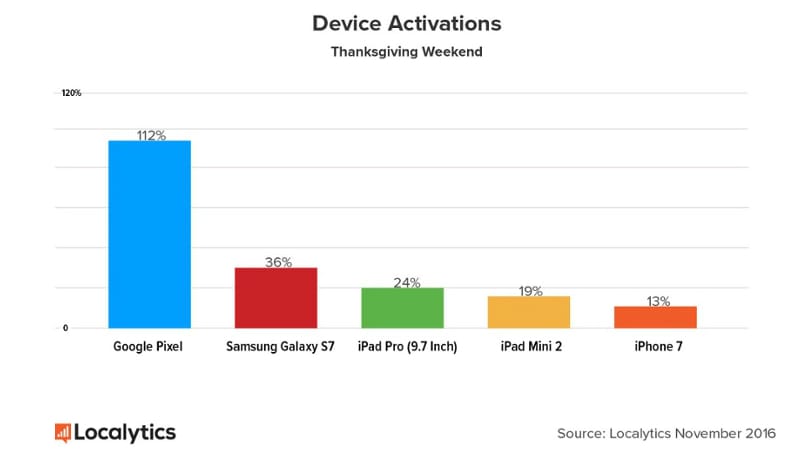 The analytics firm also compared the data with last year's iPhone models. During last year's Black Friday weekend, the iPhone 6s and iPhone 6s Plus managed to rake in a jump in new device activations of 36 percent and 29 percent respectively. The iPhone 7 and iPhone 7 Plus, on the other hand, managed to rake in only 13 percent and 1 percent increase this year over the discounted weekend.

Even though these numbers are significant for Google, they do not necessarily tell the full story. For instance, these percentages are just a rise in activations compared to the averages of previous weekends, so it in no way indicates that Google has sold more units than Apple. It merely indicates that the particular weekend was good for Google, and wasn't so great for Apple. The weekend could've accelerated its sales figures, but this data in no way means that it has beat Apple in overall sales.