Google Pixel family is already renowned for offering a great photography experience. But the search giant is now aiming to add to its offering by bringing external microphone support to the default app on the Pixel devices. The new change, which is set to debut alongside the formal availability of the Pixel 3 models, will let you professionally shoot a video by using an external microphone using the built-in camera app.

A member from Google's Pixel Camera engineering team has confirmed the arrival of external microphone support for the new Pixel models in a forum post on the Pixel User Community. Separately, a new Google Camera update has already been spotted with an option to enable or disable an external microphone on Pixel devices. The update that comes as Google Camera 6.1 is currently available for the Pixel 3 and Pixel 3 XL, though users with the Google Pixel or the Pixel 2 can also leverage the fresh change by downloading its APK file.

"At the same time as Pixel 3 launch (October 18th), we will introduce support for Android-compatible plugged-in external microphones in the default camera app for all Pixels. I hope you all enjoy the update," the Pixel Camera engineering team member with username IsaacOnCamera posted in response to tons of queries around external microphone support, as reported by Android Police. Notably, the response suggests that aside from the Pixel 3 and Pixel 3 XL, the new feature is heading to the previous Pixel models, including the original Google Pixel and Pixel 2.

With the arrival of external microphone support, Google Pixel phones will be able to capture professional-like videos. The latest Pixel models in the family importantly support full-HD (1080p) video recording at 30fps, 60fps, and 120fps frame rates, while users can also capture top-end 4K footage at 30fps or super slow motion shots at 240fps along with HD (720p) resolution. The front camera of the Pixel 3 handsets, on the other hand, supports up to full-HD (1080p) video recording at 30fps. There is also a combination of optical and electronic image stabilisation to reduce jerks, while the f/1.8 lens at the back comes with a DFoV (Display Field of View) of 76 degrees.

It is important to note that some third-party Android apps already offer external microphone support. The list includes Open Camera, Manual Camera: DSLR Camera HD Professional, and HD Camera 8K among others. However, it appears that Google is set to bring the same experience default to give the market another reason to pick Pixel handsets.

In the meantime, as XDA Developers spotted, Google Camera 6.1 silently started supporting external microphones. There is an option to switch to a compatible external microphone. It is presently available for the Pixel 3 models, though. We were able to see the same feature on our Pixel 3 unit. 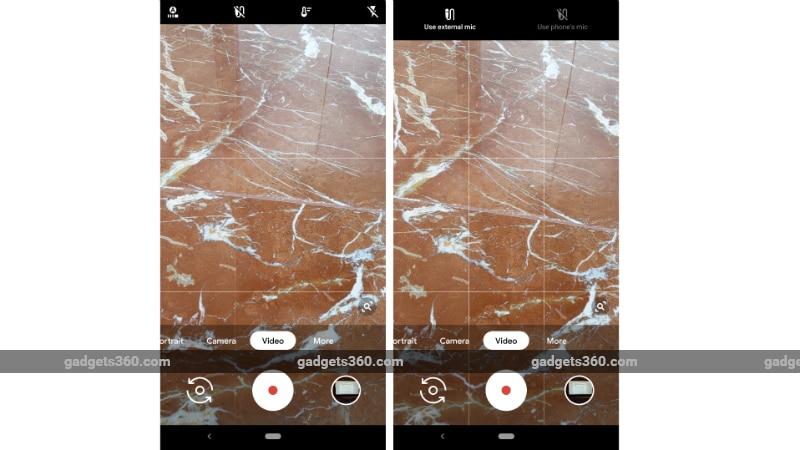 Having said that, users on the original Google Pixel or the Pixel 2 can get the latest experience by downloading the APK file of the new Google Camera app. The new version also includes RAW support as well as an all-new interface.