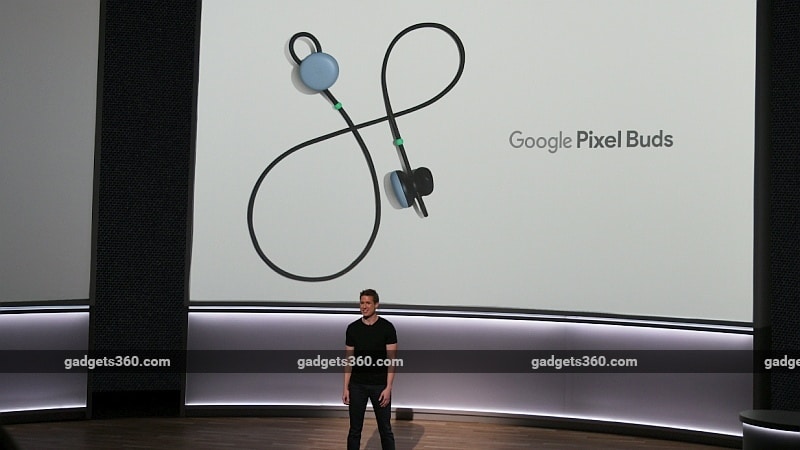 Google alongside the Pixel 2, Pixel 2 XL smartphones, as well as the Google Pixelbook laptop, launched the Pixel Buds at its media event in San Francisco. The Pixel Buds wireless headphones will take on Apple's AirPods, which at present lead the market in wireless earphones in the US.

Google Pixel Buds don't have any buttons, but they support gestures for interface and control. A user touch and hold the right earbud to call up the Assistant; can swipe forward or backward on either of the Pixel Buds to control the volume; tap on either of the buds to play or pause the music they are listening to, as well as tap and say 'next' or 'previous' to change tracks in the playlist. The earphones also support the AAC codec, for High-res Audio. The microphone is on the right earbud for beamforming, and only begins when the user taps on the earbud. For an 'instant connection', the earphones buffer audio, the company revealed.

As you can see, the Pixel Buds are not truly wireless, as they do feature a cord between the two earbuds. Google revealed the reason behind this in a later interaction with Gadgets 360, saying that according to its research, most users preferred having a cord. One obvious use would be to help prevent the loss of one earbud, a fear that the Apple AirPods evoke.

What also separates the Google Pixel Buds from the Apple AirPods is the real-time multi-lingual translation. As Google explains, "Say you're in Little Italy, and you want to order your pasta like a pro. All you have to do is hold down on the right earbud and say, 'Help me speak Italian.' As you talk, your Pixel phone's speaker will play the translation in Italian out loud. When the waiter responds in Italian, you'll hear the translation through your Pixel Buds." The feature works in 40 languages, but, only with Pixel smartphones.

Speaking to Gadgets 360, Adam Champy, Product Manager, Google Pixel Buds, explained why the real-time translation feature worked only with the Pixel smartphone, "When you look at the Pixel device and you look at Bluetooth audio routing, we have to be able to guarantee that we know exactly where to play each audio snippet. We get a snippet from the user, we get one from the person being translated and we need to know where to route it. Even coming down to the names of what those are called in the routing, within the phone, matters. So, being able to do the QA and bespoke choice of 'play this audio out this channel', and if that phone or iPhone has a different way of describing it, and that way could change over device updates or could change within model in the same SKU, cause sometimes they have different chipsets and the consumer doesn't know that; it creates an experience that's up to a quality bar that we would not like."

The Google Pixel Buds are priced at $159 (roughly Rs. 10,400), and will be available for pre-orders in the United States starting today. There's no word on India availability just yet. The Google Pixel Buds come in Just Black, Clearly White and Kinda Blue colour variants