Pixel 4a is teased to come with a long-lasting battery and bokeh camera feature.

Google Pixel 4a is likely days away from launch. The tech giant is finally teasing the arrival of a new phone on August 3, next week, after months of silence. The Pixel 4a was expected to launch at Google I/O in May, which then got cancelled due to the COVID-19 crisis. The phone later cropped up on the Google website for a brief bit, bringing back hopes of its arrival. Past leaks suggest the Pixel 4a may have a hole-punch display and is tipped to not bundle the Soli chip for motion sensor controls.

The tech giant is now teasing the arrival of a new phone on August 3 on its online store. While the teaser doesn't reveal any details on which phone this might be, it most likely will be the Pixel 4a. The confusing jargon written above the launch date throws many hints about upcoming features. Words like ‘video chats', ‘macro', ‘lowlightena', ‘Blurtutate Bokeham', and ‘longlasting batter' offer hints at key features. These words suggest that the Pixel 4a camera may be capable of taking macro, low light, and bokeh shots. Furthermore, the Pixel 4a is teased to have a long-lasting battery. 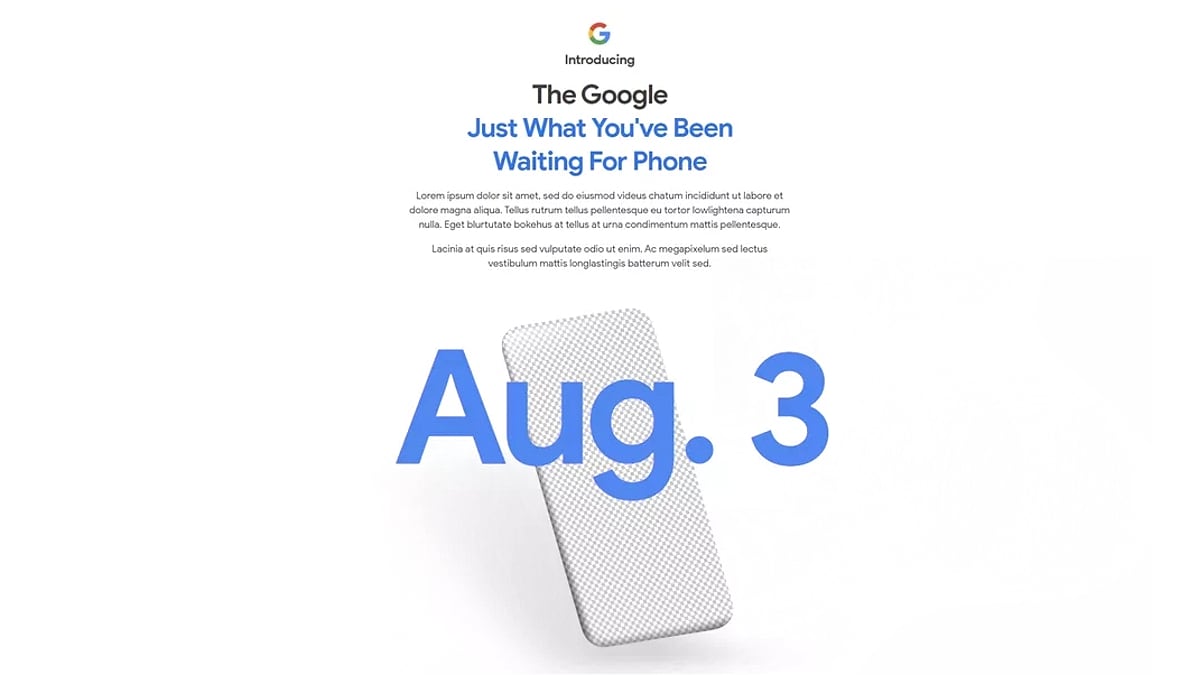 The header on the Made By Google Twitter handle has also changed with the tagline, “Introducing the Google Phone.” There's a small black hole on the top left of the header indicative of a hole-punch display on the Pixel 4a. Google is yet to confirm that this upcoming device that is being teased is the Pixel 4a, or not.

There's expected to be a Pixel 4a 5G model this time around for all those countries that support the faster network. An official-looking render was spotted on the Google website recently, and it hinted at a square-shaped camera module at the back with a single camera sensor and flash. There is also expected to be a rear fingerprint sensor at the back of the Pixel 4a. The price of the Pixel 4a is tipped to be at $299 (roughly Rs. 22,400) for the 64GB model and $349 (roughly Rs.s 26,100) for the 128GB model. Rumoured specifications include a 5.8-inch display, Snapdragon 730 SoC, 6GB RAM, and 18W fast charging.

Google Pixel 4a With Hole-Punch Display Teased to Launch on August 3
Comment
Read in: हिंदी