Google Pixel 4 XL has received a repairability score of 4 out of 10 on the iFixit scale. 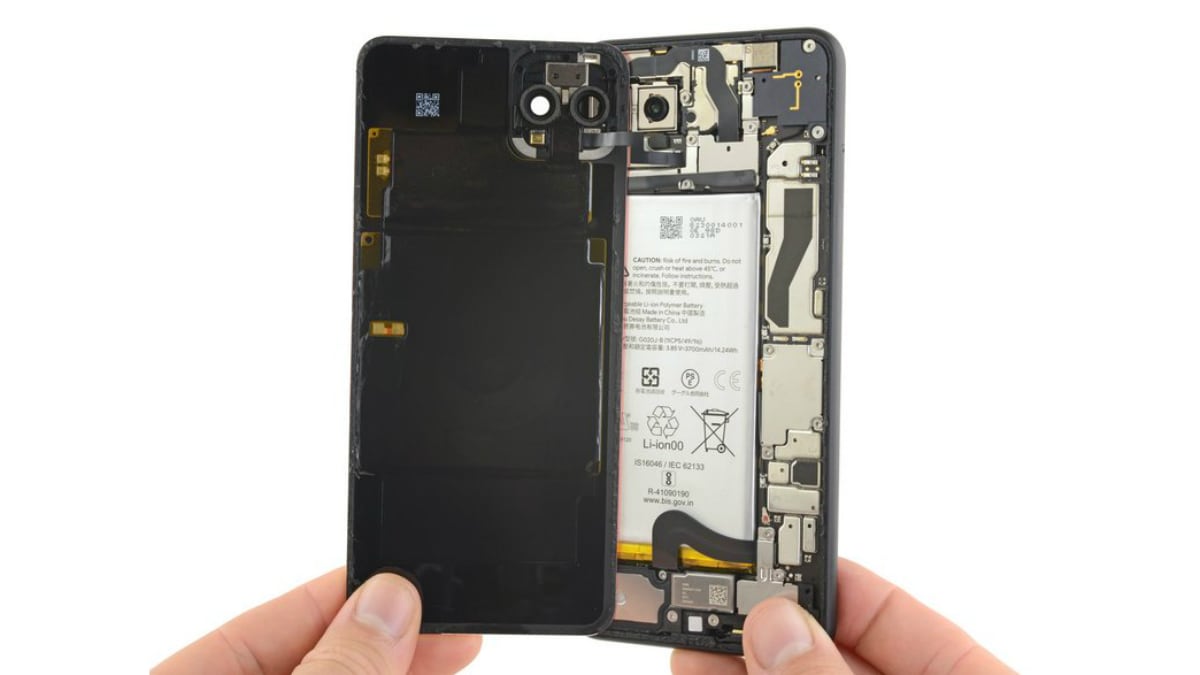 Google Pixel 4 XL holds the back panel with strong adhesive

Google Pixel 4 XL is complicated to repair, DIY repair geeks at iFixit have noticed while covering its teardown. The phone has glass panels on its front and back that not just make it a fragile piece of hardware but also a difficult to repair flagship. The fresh teardown also shows that the Soli chip that Google has offered on the Pixel 4 and Pixel 4 XL to enable the highly compelling Motion Sense functionality sits alongside the earpiece speaker unit available at the front. Separately, a teardown video of the Pixel 4 has also been published on YouTube shows how difficult it is to repair.

The iFixit teardown coverage of the Google Pixel 4 XL shows that it carries "mercifully thin but strong" adhesive to hold the back glass panel. The back panel also includes the wireless charging coil and NFC coil. Once the panel removed, there are Torx screws covering the battery connectors.

Similar to the Google Pixel 3 XL, the Pixel 4 XL has its battery pack stuck with ample amount of adhesives. However, it's easy to remove the battery after detaching the glues. A delicate Active Edge flex cable is also available just underneath that can accidentally be slicked while taking out the battery. Further, the Pixel 4 battery is found to be slightly smaller in capacity with 14.24Wh cell over the 15.04Wh cell powering the iPhone 11 Pro Max and 16.56Wh cell available on the Samsung Galaxy Note 10+.

The teardown coverage also notes that the biometric hardware of the Pixel 4 XL comprises two well-separated Near Infrared (NIR) cameras, NIR flood emitter, and an NIR dot projector. All this is available next to the 8-megapixel selfie camera.

At the front, the Pixel 4 XL also has the earpiece speaker that includes the Soli chip alongside a microphone and ambient light sensor. The Soli chip comes in a rectangle form with no moving parts.

"Although radar technology has been in use for a long time and seems simple enough on paper, we're at a loss as to how Google stuffed the entire system into a tiny featureless rectangle with no moving parts," the iFixit team has noted in its teardown coverage.

The display of the Google Pixel 4 XL that comes with 90Hz refresh rate is found to require efforts to remove it from the system. Further, the teardown shows that the display is manufactured by Samsung. The iFixit team has also noticed a Knowles audio processor chip that could be used for on-device speech recognition features, including the all-new Recorder app.

"All repairs require access through the stubbornly-glued back panel," the teardown coverage notes.

Alongside the coverage by iFixit, YouTube channel PBKreviews has covered a video teardown of the Pixel 4. The smartphone appears to have similar repairability hindrances. There are adhesives and several Torx screws. Likewise, the Soli chip on the Pixel 4 was spotted alongside the earpiece speaker in a separate broad.

The Pixel 4 and Pixel 4 XL were unveiled by Google last week. Both Pixel phones are initially debuting in limited markets, but not in India.