Both Google Pixel phones appear to have dual selfie cameras.

Google Pixel 4 and Pixel 4 XL screen protectors have been leaked online. The latest leak corroborates previous reports and suggests thick bezels on the top and bottom of both Pixel 4-series phones. The alleged screen protectors also hint at the presence of new sensors that could be used for gesture recognition. Google notably has its Project Soli in the pipeline for quite some time that could debut on the Pixel 4 and Pixel 4 XL. Separately, some CAD-based renders of the Pixel 4-series phones have emerged on the Web to indicate Project Soli-based technology.

A tipster who leaks unannounced developments on social media using pseudonym Ice Universe has posted the image showing two screen protectors on Twitter. The screen protectors are claimed to be of the Google Pixel 4 and Pixel 4 XL.

Both screen protectors suggest that the forehead and chin of the Pixel 4 and Pixel 4 XL would be thicker than what we saw on flagships such as the OnePlus 7 Pro and Samsung Galaxy S10. This infers that both new Pixel phones would lack a pop-up selfie camera module or a hole-punch design.

The oval opening of the Pixel 4 Series front panel means that the Google Pixel 4 Series will be groundbreaking and new and worth looking forward to. pic.twitter.com/9Pg9bGcWrs

Further, the top bezel appeared on the leaked screen protectors shows a capsule-shaped sensor area on both Pixel smartphones -- available next to the earpiece. This could be for the sensors enabling motion sensing and gesture recognition.

Back in 2015, Google announced Project Soli as its radar-based gesture recognition technology. The initial model was targeted at wearables and IoT devices. However, the new technology is likely to be available to the masses through the Pixel 4 and Pixel 4 XL smartphones.

The screen protectors also hint at a dual selfie camera module at the front -- alongside the usual array of sensors, including ambient light and proximity sensor.

Some high-quality renders of the Pixel 4 and Pixel 4 XL based on the initial rumours have also been released by the tipster who uses Twitter account @OnLeaks in association with iGeeksBlog. The renders look similar to the earlier set of leaked-based Pixel 4 XL renders that surfaced recently.

Both new Pixel phones appear to have a similar design with a square camera bump at the back and a notch-less, traditional curved-edge display. The renders also suggest a lack of front-firing stereo speakers. 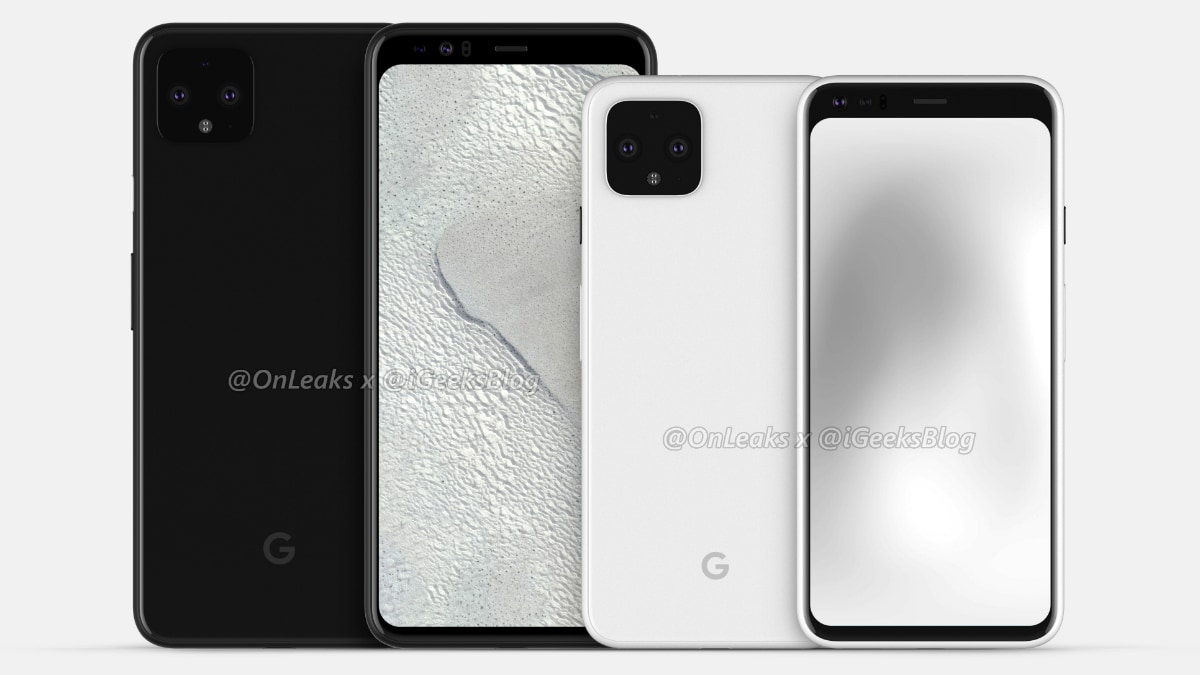 Google Pixel 4 and Pixel 4 XL both appear to have a square camera bump at the back
Photo Credit: OnLeaks/ iGeeksBlog

Last week, the purported specifications of the Pixel 4 and Pixel 4 XL emerged online. Both Pixel phones are claimed to have 6GB of RAM instead of 4GB available on the Pixel 3 and Pixel 3 XL. The handsets are also said to have a 128GB storage option.

To recall, Google last month confirmed the development of Pixel 4 by releasing its official image. The image showed off the square bump that may include two camera sensors.