Google Pixel 4 and Pixel 4 XL may get launched on October 15, according to a new leak. This information can be claimed by looking at an alleged promotional image of the smartphone, that shows the October 15 date on the lock screen. The Pixel 4 smartphones have been victims of many leaks leading to their official launch, and this year both the smartphones are reported to come with an enhanced Night Sight camera, new Google Assistant features and the much talked about Motion Sense air gestures. Separately, the Pixel 4's Motion Sense feature has been leaked in a new video, while its screen size and processor details have been tipped in another leak.

The leak tipping the launch date of the Pixel 4 smartphones comes directly via reputed tipster Evan Blass (aka @evleaks), in a tweet that says "Google Fall Event" and shows an alleged photo of the Pixel 4, displaying the October 15 date on the lock screen. So, if this information does turn out to be true, then it falls perfectly in line with the October time-frame during which Google usually announces its flagship Pixel smartphones. The Pixel 3 smartphones were officially announced on October 9, last year. 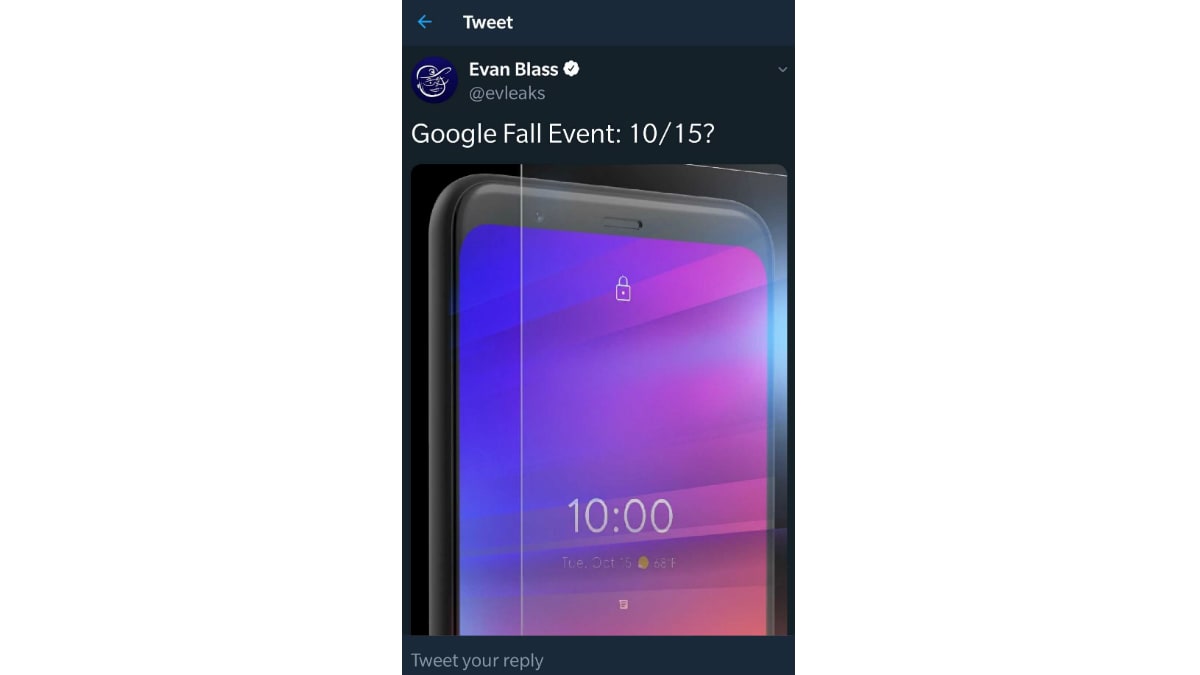 Moving on, in a separate Pixel 4 leak, the smartphone's ‘Motion Sense' settings are reportedly revealed. As of now, the video from the original source has since been deleted, but courtesy of a tech YouTube channel, This is Tech Today, which re-uploaded the video, it can be seen that users will be able to skip songs or silence interruptions using Google's ‘Motion Sense' technology. Head over to 13:03 in the video to check out the feature in action.

Well, we are just a month away from the official of the Pixel 4 smartphones, and if October 15 does indeed turn out to be the official reveal date, then it doesn't get any better than that.

Further reading: Google, Google Pixel 4, Google Pixel 4 XL, Motion Sense, Qualcomm Snapdragon 855 SoC
Aman Rashid Email Aman Aman Rashid is based in New Delhi and writes news, features, and makes videos for Gadgets 360. He works as a Reporter (Technology) for Gadgets 360 and has written many how-to articles on topics such as social media (WhatsApp, Instagram), smartphones (Android, iOS), computers (Mac, Windows) along with writing news articles regularly. Aman is available on his Twitter handle @AR_9192 and on Instagram as @a_rash9192. You can further get in touch by dropping a mail at amanrashid@ndtv.com. More
Mi Water Purifier to Launch in India on September 17, Xiaomi Teases
iPhone 11 Pro vs iPhone 11 Pro Max: What's the Difference