Google Pixel 3a, Pixel 3a XL Receive Bluetooth SIG Certification Prior to May 7 Launch

Pixel 3a was recently spotted on Geekbench packing 4GB of RAM. 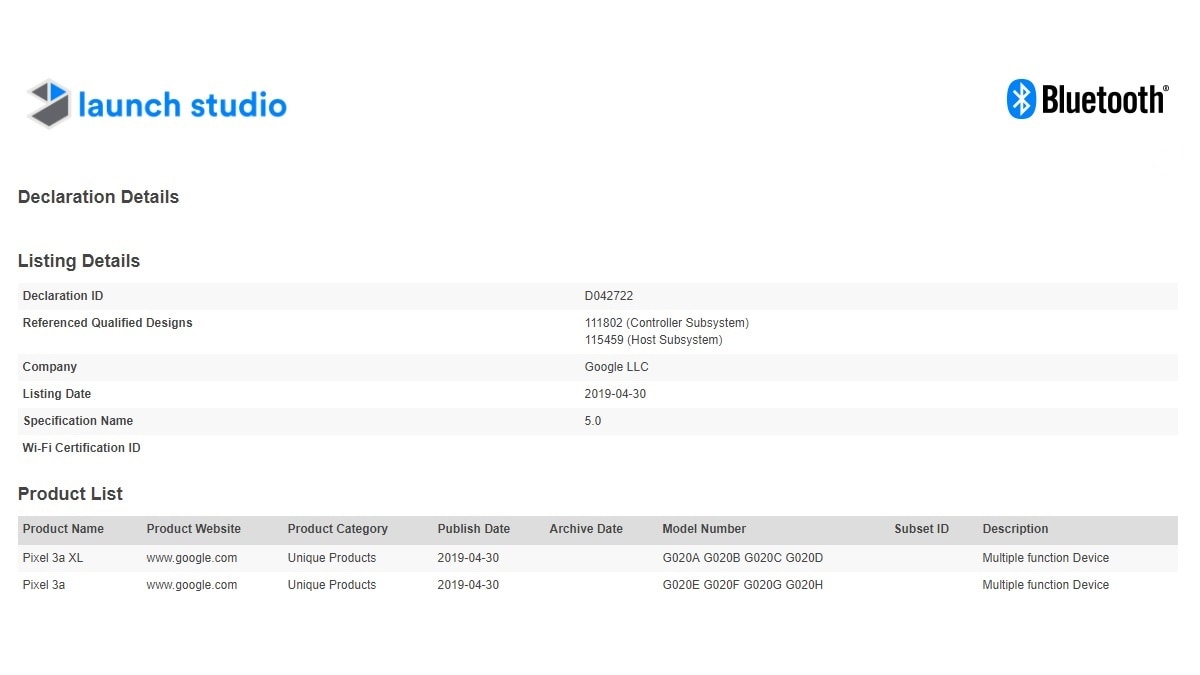 The Pixel 3a and the Pixel 3a XL duo has so far appeared in multiple leaks as well as the official Google Play Developer console, Google store, and the Android Q beta code as well. And with Google officially confirming intentions of making hardware announcements on May 7, the Bluetooth SIG certification merely serves are an additional assurance that the mid-range Pixels will be announced soon. The Bluetooth SIG certification of the Pixel 3a and Pixel 3a XL was spotted by NashvilleChatter.

Talking about specifications, a recent Geekbench visit indicated that the Pixel 3a will be powered by the octa-core Qualcomm Snapdragon 670 SoC paired with 4GB of RAM, something that a previous leak had also tipped. The Pixel 3a XL, on the other hand, will reportedly draw power from the Snapdragon 710 SoC. The Pixel 3a is tipped to sport a 5.6-inch a full-HD+ (1080x2220 pixels) OLED display and will reportedly sport a single 12-megapixel rear camera and an 8-megapixel selfie snapper.

The battery capacity will reportedly stand at 3,000mAh with support for 18W fast charging. Leaked case renders and alleged official renders show a design that is quite similar to the Pixel 3a, with Iris and Purple colours also making rounds of the rumour mill. We'll get to know more about the Pixel 3a and the Pixel 3a duo at the Google I/O conference where the two phones are expected to make their official debut.

Google's Eric Schmidt, Diane Greene to Step Down From Board in June
Facebook Messenger to Get Faster iOS App, New Desktop Apps for Windows and macOS, and More