Google Pixel 3a aka Sargo Spotted on Geekbench With 4GB of RAM, Scores Lower Than Pixel 3a XL

Pixel 3a is tipped to draw power from the Snapdragon 670 SoC. 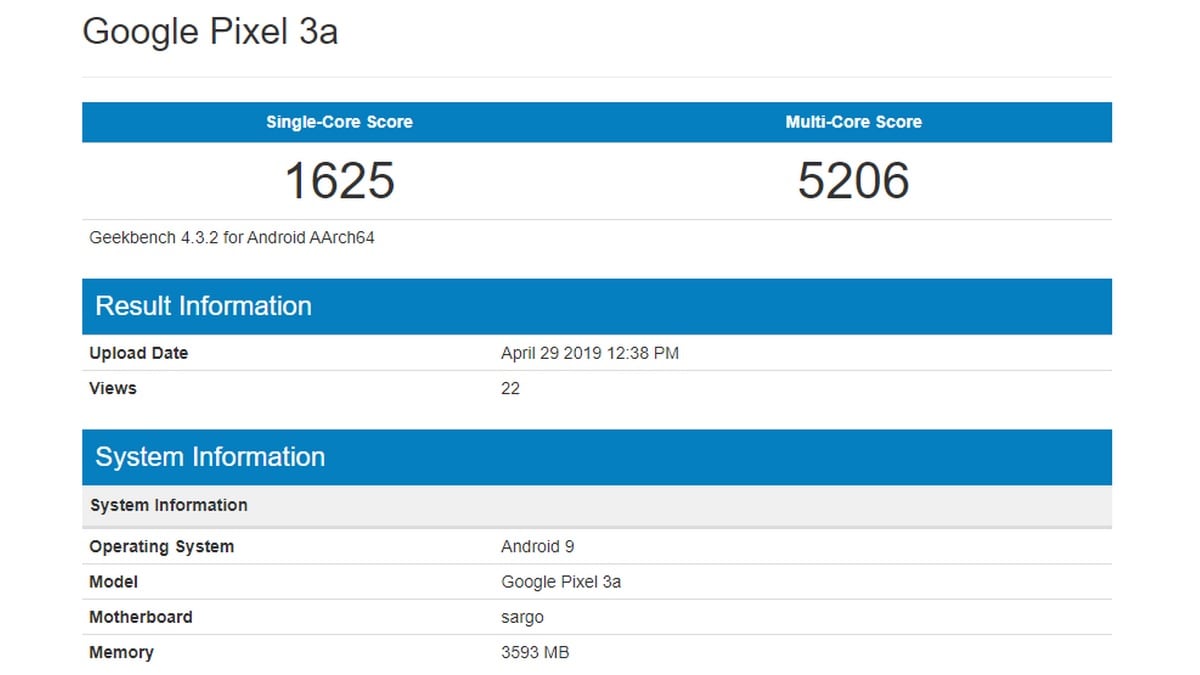 Pixel 3a has been spotted on Geekbench twice in less than a week.

Google's upcoming mid-range Pixel smartphones - the Pixel 3a and the Pixel 3a XL – are reportedly going to make their debut on May 7 at Google's I/O conference. Ahead of the official launch, the smaller Google Pixel 3a has been spotted on Geekbench. Codenamed ‘Sargo', the Pixel 3a was spotted on the benchmarking platform running Android 9 Pie and packing 4GB of RAM. The name of the octa-core chipset powering the device is not mentioned, but as per previous leaks, the processor in question is the Snapdragon 670 SoC.

The Geekbench listing of the Pixel 3a, dated April 29, mentions the motherboard of the device as ‘Sargo', which is reportedly the codename of the upcoming smartphone. The phone scored 1,625 on the Geekbench single core test and 5,206 on the multi-core test. In another listing on the benchmarking platform dated April 24, the Pixel 3a put up a tally of 1,627 and 5,189 in the single and multi-core tests respectively.

The processor is mentioned as an octa-core Qualcomm SoC clocked at 1.71GHz paired with 4GB of RAM, with Android Pie handling things on the software side. While the name of the chipset is not mentioned, a previous leak indicates that the Pixel 3a will be powered by the Snapdragon 670 SoC. The Pixel 3a XL, on the other hand, will reportedly draw power from the Snapdragon 710 SoC, and its leaked higher benchmark scores narrate the same story.

As for the rest of specifications, the Pixel 3a is tipped to pack a 5.6-inch a full-HD+ (1080x2220 pixels) OLED display with a pixel density of 440ppi. Talking about the cameras, the Pixel 3a will reportedly sport a single 12-megapixel rear camera and an 8-megapixel selfie snapper, while the battery capacity will reportedly stand at 3,000mAh with support for 18W fast charging.

The design, as per leaked case renders and alleged official renders, will reportedly be quite similar to that of the Pixel 3 with thick top and bottom bezels. As for the colours, we have seen the phone appear in black and white, however, Iris and purple colour options have also surfaced. We'll get to know more at the Google I/O conference, where the company is expected to lift the covers from the Pixel 3a and the Pixel 3a duo.