Google Pixel 3 XL is found to have an AMOLED panel from Samsung, as revealed through a teardown conducted by iFixit. This is a major change from Pixel 2 XL as Google last year relied on LG for using its pOLED display panel that didn't perform well due to a visible blue tint. The teardown also shows the presence of the Google Titan M security chip on the Pixel 3 XL as well as the identical Pixel Visual Core that debuted on the Pixel 2 XL.

Among changes from last year's Pixel 2 XL, the iFixit team has spotted a Samsung AMOLED display on the Pixel 3 XL. This new change is already praised by reviewers — including in our review — and has the potential to attract customers. The new panel doesn't have the dreaded 'blue tint' issue that affected last year's model. iFixit, however, notes that replacing a Pixel 3 XL screen is tricky as the display panel has a notch design that adheres to the frame.

In addition to Samsung's display, the Pixel 3 XL also has antenna assemblies similar to what's seen on the Samsung Galaxy lineup. The battery pack of the handset is also found to be "stubborn". 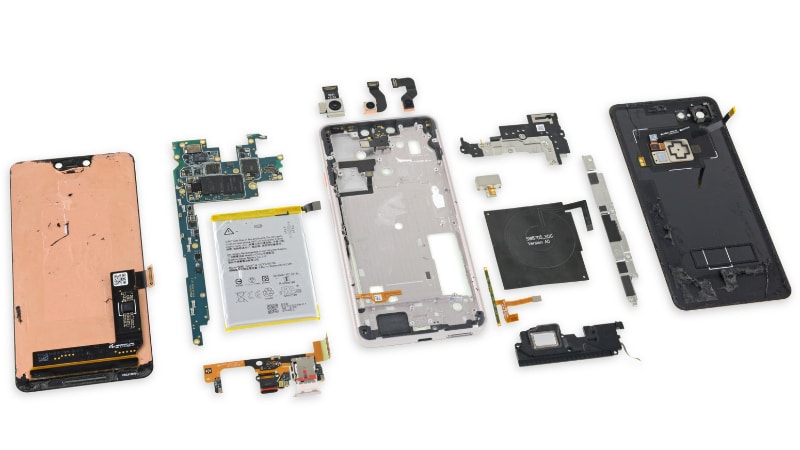 The iFixit team has also spotted the Google Titan M security chip that is available to enhance user privacy on the new Pixel model. Further, there is plenty of glue that helps the phone maintain the IP68 certification. "It looks like the Pixel 3 XL still uses foam adhesive, but it's far more tenacious than the repair-friendly stuff we saw last year," iFixit writes in its teardown coverage.

Apart from the glue, it is the rear glass panel of the Pixel 3 XL that enables wireless charging but makes its repairability harder than the last year model. The iFixit team says that the rear panel of the new Google smartphone is 100 percent crackable.

Moreover, iFixit has given the Pixel 3 XL a repairability score of 4 out of 10. This is in line with what was received by the Samsung Galaxy Note 9.