Google is set to release Pixel 3 and Pixel 3 XL variants later this year. The two smartphones have been leaked on multiple occasions, and now one of the variants have been spotted on a benchmark site. Until now, leaks around the Google Pixel 3 XL had suggested that the smartphone will sport a single-camera setup at the back, a dual selfie camera setup, and a display notch. A Geekbench listing of the Pixel 3 XL has affirmed some of the specifications of one of the models. According to the latest listing, the Google Pixel 3 XL will pack a Snapdragon 845 processor, 4GB of RAM, and run Android P.

As per the Geekbench lisiting, the Google Pixel 3 XL was able to score 2,426 on the single-core test and rose to 8,355 on the multi-core test. The results achieved by the smartphone are not too impressive but appear to be good enough for a flagship. It showed the Pixel 3 XL running the benchmark with octa-core Snapdragon 845 processor with clock speed up to 2.8GHz, 4GB of RAM, and Android 9.0 P. 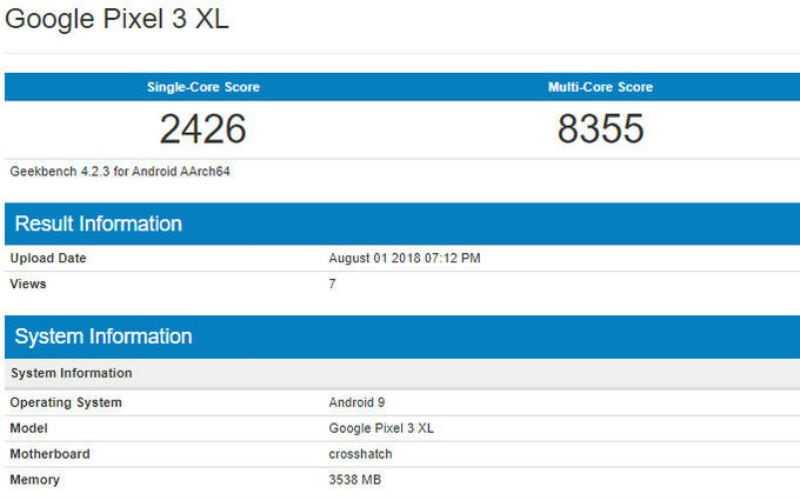 In comparison, the upcoming Galaxy Note 9 with Snapdragon 845 SoC and 6GB of RAM was spotted in a Geekbench listing earlier this year with a single-core score of 2,190 and a multi-core score of 8,806. It should be noted that there has been no official information from Google regarding the 2018 Pixel models. This is just a listing ahead of the launch and should be taken with a pinch of salt.