Google Pixel 3 and Pixel 3 XL have emerged as one of the most anticipated smartphones of 2018. While both new smartphones are about to debut globally, the last minute leaks highlighting some of the key features of the two new Pixel models have surfaced on the Web to detail what Google has cooked up behind the scenes. Few images, once again showing the design of the Pixel 3 XL, have leaked on Twitter. The Pixel 3 and Pixel 3 XL price have also been leaked. Separately, artificial intelligence (AI) backed camera features of the Pixel 3 have been spotted. The handset is reported to have options such as 'Top Shot', 'Photobooth', and 'Super res zoom'. Screen specifications and colour variants of the Pixel 3 and Pixel 3 XL have been spotted through official-looking pamphlets. The handsets are found to have Clearly White, Just Black, and Not Pink colour options. Renders showing the new Pixel models in all these three colour options have also been outed. An official Pixel 3 case has also been revealed that features a fabric design. Aside from the last-minute revelations, Google has officially released a video that takes a jibe at all the leaks.

Tipster This Is Tech Today on Twitter leaked an alleged Pixel 3 XL image along with its retail box. The images show the same handset that was outed in previous leaks as well. However, the Twitter user also reveals the prices of the Pixel 3 and Pixel 3 XL. While the former is said to carry a price tag of GBP 749 (roughly Rs. 72,500), the latter is said to be priced at GBP 869 (roughly Rs. 84,100). These could be the prices of the top-end variants of the new Pixel models. Notably, the prices aren't in line with the recently leaked Canadian prices of the Pixel 3 handsets. There is also a GBP 70 (roughly Rs. 6,800) increase when compared with the launch price of the Pixel 2 XL. We certainly need to wait for the formal launch to see the difference.

Apart from the prices, the tipster claims that the over last year's Pixel handsets, the Pixel 3 and Pixel 3 XL have notable improvements on the part of the display and other hardware. The dual selfie camera setup on both smartphones has also been reiterated, though this time it is said to have a wide-angle and normal set of lenses.

Popular tipster Evan Blass has separately leaked an image that combines all the Pixel 3 and Pixel 3 XL renders. These are showing the Pixel 3 models in three colour options as well as revealing the official "3" wallpaper that carries the October 9 date to match the launch schedule. The stock wallpaper presumably matches the colour option of Pixel 3 handset. This means if you look at the White Pixel 3, it has the wallpaper in White, while the Black variant has the wallpaper in Black. 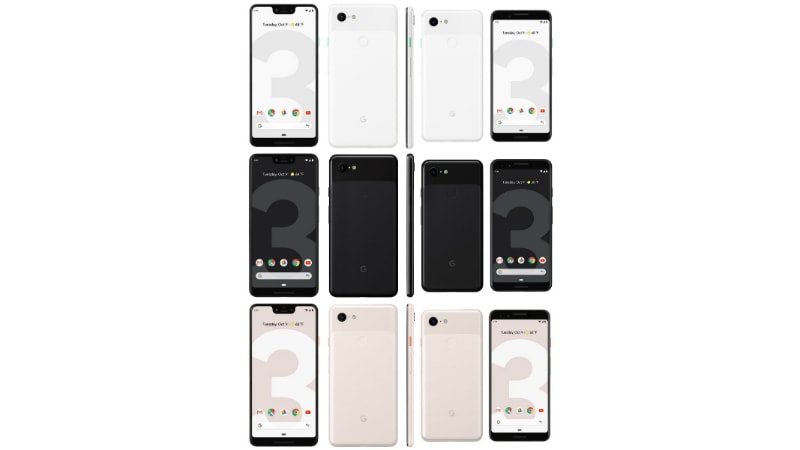 Coming towards the three colour options of the Pixel 3 and Pixel 3 XL, these are found to be officially called Clearly White, Just Black, and Not Pink, as spotted in official-looking pamphlets by GSMArena. The renders featured in the image shared by Blass further detail each colour variant. There is a matte finish at the back along with a glossy, frosted glass area covering the top of the rear panel - similar to the Pixel 2 models. The power/ lock button on the Pixel 3 also has new colour treatment. While the Black variant of the Pixel 3 is spotted a Black power/ lock key, the White variant has a Teal-coloured power button and the Not Pink variant has a dark Pink button.

As reported by Android Police, an official Pixel 3 case has been spotted at Target with a fabric design. The case has a two-tone colour and a mesh-like finish that matches the fabric of the Google Home speakers. It seems like the case is designed to match the Not Pink colour variant of the Pixel 3 and Pixel 3 XL. Further, it is closest to the Coral Pixel 2 case with a darker colour and cutouts matching the next-gen Pixel models. The case protects the side-mounted volume rocker and the power/ lock key alongside protecting the back of the Pixel phones.

Price of the Pixel 3 case is a mystery, though the fabric cases for the Pixel 2 are available for purchase in the US at $40 (roughly Rs. 3,000). 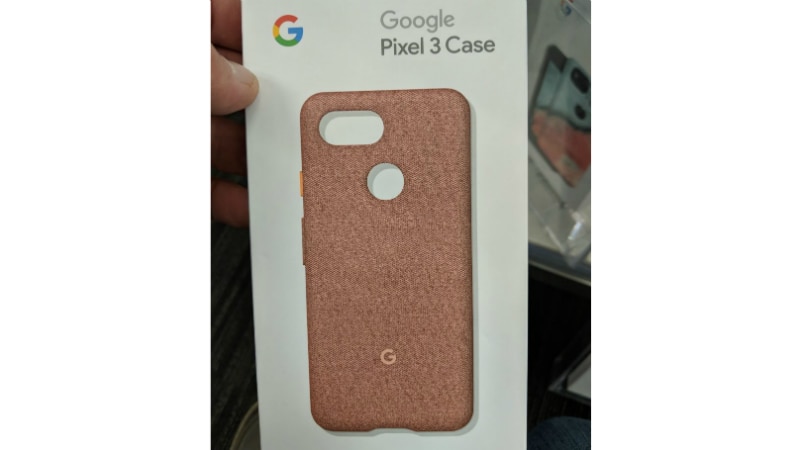 Folks at 9to5Google have separately leaked all the major camera features of the Pixel 3. It is reported that the Pixel 3 will exclusively have a feature called Top Shot that will capture a burst of frames after pressing the shutter button. This will help the machine learning-backed system to find the best photos from the array of shots. It is said that the feature will take into consideration various factors, including smiles, open eyes, and the attention of the subject. The camera could also suggest the best from multiple shots through a Smart Capture suggestion pill, though users are also said to have the option to swipe up on a photo to see the their "Smart captures". The Pixel 3 is also reported to have a Photobooth feature that will automatically find the best selfies. It is said to work similar to how Google Clips camera captures clips using AI algorithms. Further, the new Pixel models are likely to include a Super res zoom feature that will enable an AI zoom - without requiring a secondary camera sensor.

For selfie-obsessed users, the Pixel 3 is said to have a Super Selfies camera that will use the wide-angle camera of the dual selfie camera setup to capture "more in a standard selfie". The new Pixel is additionally reported to have a subject tracking autofocus functionality that will track subjects in view without requiring users to manually tap the screen to focus on a particular subject in the frame. There could also be the existing features such as Face Retouching with options for Soft and Normal shots and Motion Photos, slow-motion video, panorama, and AR stickers. Moreover, the interface of the Google Camera app is also found to be redesigned with the option to switch different available modes by swiping the screen. 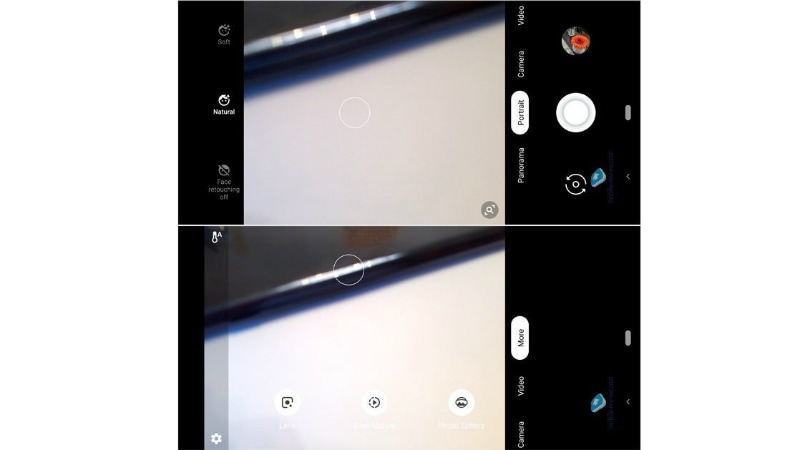 In addition to all the major leaks that emerged at the time of filing this story, Google has released a short video that teases the Pixel 3 launch by making fun of all the leaks and rumours. The video that has been posted on Twitter via Made by Google account shows clips of a handful of tech reports and YouTubers to mock the leaks.

So you think you know… Tune in tomorrow to see for yourself. https://t.co/4zTwRXcn1x #madebygoogle pic.twitter.com/3IO3xaMaP8

Google also teases some unannounced details in an accompanying tweet by saying "So you think you know..." This suggests that alongside the Pixel 3 handsets, the search giant could have some new devices at its Pixel event later today. However, we certainly need to wait until the formal launch to see what all Google has to take on the likes of Apple and Samsung that already brought their this year's flagships.