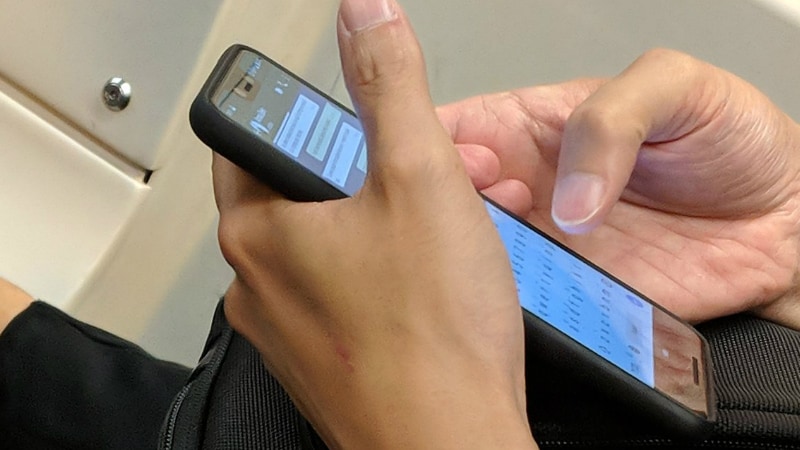 Google Pixel 3 XL is expected to become the most premium smartphone in the Pixel lineup this year, and leaks surrounding this variant have been numerous. Now, a fresh leak gives us a look at the Pixel 3 XL in the wild, in fact it was spotted by a user on public transit, and the user then decided to take a sly photo of it, to give us a look at the upcoming smartphone before its release. The leaked image confirms few design details of the smartphone, including the front speakers and the display notch.

A MobileSyrup reader spotted someone using the Pixel 3 XL on a street car in Toronto, Ontario, and took a photo of it. This leaked image shows the Pixel 3 XL sporting a display notch, but not as wide as seen on the iPhone X. This notch is rather narrow, but a bit taller than the iPhone X. The front stereo speakers are making a comeback on the Pixel 3 XL, therefore a considerable chin is seen at the bottom as well. The Pixel 3 XL user was chatting on WhatsApp, and this could be a test phone that a Google employee may be using to ascertain the feasibility of a commercial launch.

The Google Pixel 3 XL is tipped to sport a glass back, and come with wireless charging capabilities. It is rumoured to feature a 6.7-inch display QHD+ (1440x2960 pixels) display panel, and be powered by a Snapdragon 845 SoC under the hood, coupled with 4GB of RAM. It is expected to pack a 3,430mAh battery, and sport a 12.2-megapixel rear camera, and three 8.1-megapixel front cameras - one of which is speculated to provide Face ID style recognition, and another is thought to be either a reporting error by AnTuTu or a virtual sensor. The Pixel 3 and Pixel 3 XL are both expected to launch on October 4, and both the smartphones will run on Android 9 Pie out of the box. A retail box leak suggests that the Pixel 3 XL will launch in White colour option, apart from coming bundled with earphones and charging adapter.