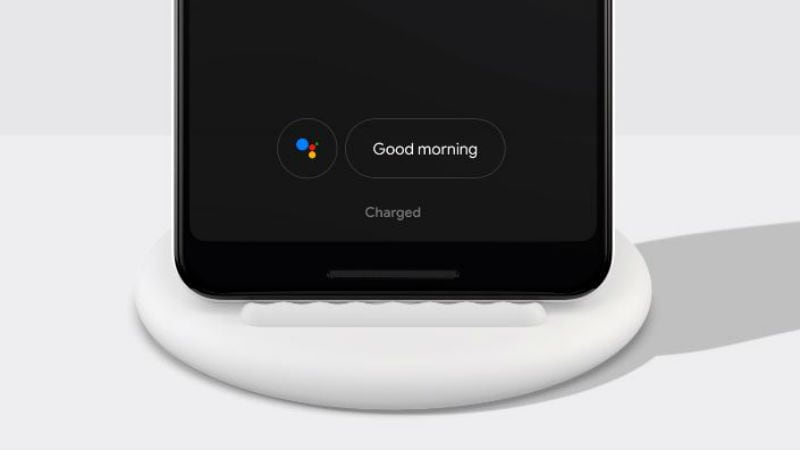 If you are not using the Pixel Stand or another Google-approved charger, you are stuck at 5W

Google's latest flagships - Pixel 3 and Pixel 3 XL - support Qi wireless charging and come with a wireless charger called Pixel Stand that provides 'fast wireless charging'. However, buyers of the smartphones have run into a big surprise. For some reason, the company is limiting third-party Qi chargers from reaching top speeds on the Pixel 3 lineup. This essentially means that if you want to use a third-party charger you will have to be content with 5W charging speeds. However, if you buy the Rs. 6,900 Pixel Stand, the Pixel 3 and Pixel 3 XL will be able to get wirelessly charged at 10W.

A Google Pixel 3 user took to Reddit to complain that a 10W Anker wireless charger was able to provide only 500mA to the phone, as found via Ampere charging app. When contacted by the user, Anker reportedly said that only Google's official wireless charger can provide 10W for the Pixel 3 and Pixel XL 3. The company further added that Google sets a limitation for third-party fast wireless chargers and they can only provide 5W for these two handsets. We reached out to Google to confirm the issue, and in a statement to Gadgets 360, a spokesperson said, "We don't limit third-party devices, in fact, we're working with our partners in the Made for Google program to get fast 10W chargers certified for use with Pixel 3 (Belkin announced its 10W Pixel 3 charger already which will launch in the coming weeks). Pixel Stand and Pixel 3 work together through the protocol we've developed for fast charging. Everything else charges at the industry standard Qi 5W."

Android Police was able to further clarify this issue with Google, which said that the Pixel 3 only charges at 10W on the Pixel Stand because a "secure handshake" takes place. When other manufacturers follow suit, the certified chargers will use the protocol currently used by the Pixel Stand to charge the new Pixel handsets at 10W.

Based on initial reports by early adopters, the latest Pixel lineup seems to have been facing several issues ever since its launch. However, there is some good news for previous Pixel smartphone users. We know that a key highlight of the Pixel 3 lineup is a redesigned Google Camera app that comes with new features. According to a previous report, the Google Camera app comes with several changes from the current app on previous Pixel handsets. The key differences include a new UI, RAW support, and a new panorama mode. Notably, the Google Camera 6.1 update, which shipped on the Pixel 3, 3 XL, is now reportedly rolling out to Pixel 1, Pixel 2, and Nexus smartphones as well. According to another Redditor, you can go to the Google Play Store from your watch and scroll to 'Apps on your phone' to install the Camera app.

Also, as spotted by Android Police, a Redditor claimed there is another lesser-known feature, that the app can add a remote viewfinder to any smartwatch running Wear OS.