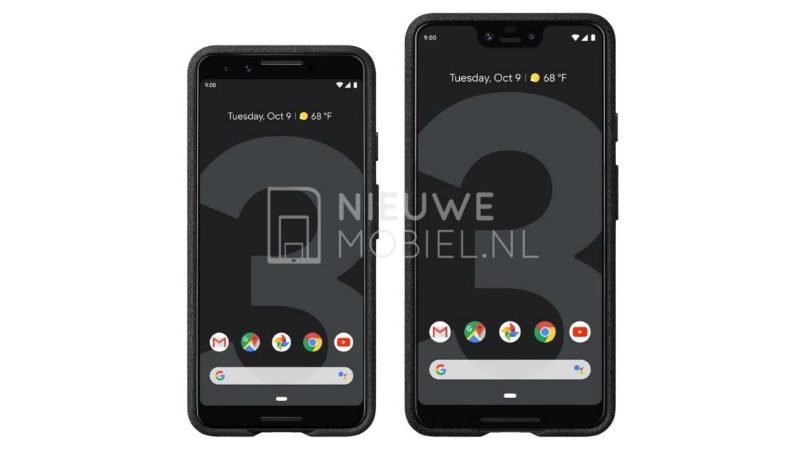 Google Pixel 3 and Pixel 3 XL are anticipated to launch at an event in New York on October 9, as per invites sent out by Google earlier this month. We have seen alleged Pixel 3 and Pixel 3 XL live images getting leaked in the past, and now, a leaked press renders of the smartphones have made their way to the Internet. The renders give us a look at the substantially-sized notch on the Pixel 3 XL, and the lack of one on the smaller Pixel 3. Back panels of the smartphone show single cameras on both handsets, along with a fingerprint sensor.

The press renders come to us from Dutch blog Nieuwemobiel. The report claims that the Pixel 3 will sport a 5.4-inch display while the Pixel 3 XL is expected to get a larger 6.2-inch panel. The Pixel 3 XL is seen to have a deep notch, which some users would consider ugly given the lack of symmetry in design. The Pixel 3 does not have a display notch but has huge borders on both the top and bottom.

The back of both the Pixel 3 and Pixel 3 XL is shown with a fabric case, which was available with the Pixel 2 range as well. Additionally, the renders show dual selfie cameras on both these handsets, leading us to believe that Google will offer some sort of hardware bokeh with these two upcoming phones.

The home screen reveals that the two Pixel phones would run Android 9.0 Pie out-of-the-box, however the Google Search bar is placed at the bottom. There is also a new wallpaper on the phones, signifying the third generation of Pixel handsets. That's it for the latest leak. Let's delve into what some previous leaks and rumours have pointed towards.

Just last week, Google had teased that a new Aqua/ Mint Green colour option would be made available apart from the shades of Black, Blue, and White that the tech giant has made available in the past two Pixel generations. The Pixel 3 XL is said to have been spotted in a Lyft-licensed cab in the US, however there is no official confirmation on the same.

Emmy Awards 2018: How to Watch in India the TV Shows That Won Big at This Year's Emmys