While nothing about the Google Pixel 3 Lite has been confirmed so far, the handset has now appeared in an image that shows its presence alongside the Pixel 3. The new handset is codenamed 'Sargo' and is assumed to be priced somewhere between $400 and $500 (roughly Rs. 28,300 - Rs. 35,400). It was initially spotted through a teardown ARCore APK that also showed a handset with codename 'Bonito' as a new Google model. The Pixel 3 Lite is expected to run Android Pie out-of-the-box. Also, it could debut with a comparatively thick-bezel display over what was featured on the Pixel 3.

As per the latest image, courtesy Russian blogger who goes by the pseudonym kzkv on Twitter, the purported Pixel 3 Lite has similar design language of last year's Pixel 2. It has thick bezels on the left and right of its display panel as well as curved corners. The image shows the handset alongside the Pixel 3. It also suggests the presence of Android Pie that comes preloaded on the Pixel 3 family. Moreover, the source calls it Sargo, which is notably so far the codename of the Pixel 3 Lite. 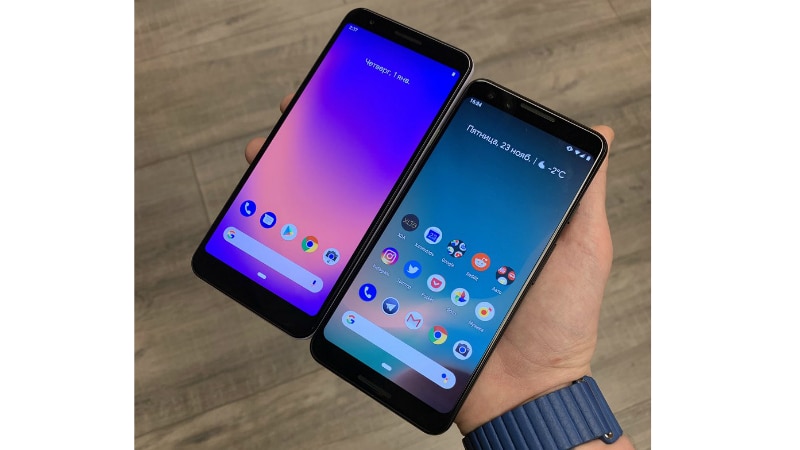 The Pixel 3 Lite is rumoured to have a 5.56-inch full-HD+ (1080x2220 pixels) IPS display along with an 18.5:9 aspect ratio and 444ppi of pixel density. It is also said to have an octa-core Qualcomm Snapdragon 670 SoC, paired with Adreno 615 GPU and 4GB of RAM as well as 32GB of storage. Furtherm, the smartphone could have a single, 12-megapixel rear camera along with an LED flash, 8-megapixel front camera, and a 2,915mAh battery along with Qualcomm's Quick Charge 4+ support.

Last week, a few hands-on images of the alleged Pixel 3 Lite surfaced that showed its plastic build with the presence of a 3.5mm headphone jack. The images also showed that the phone has a USB Type-C port at the bottom and a fingerprint sensor at the back.

A recent teardown of the ARCore APK suggested that Google could bring new models to its Pixel family. The teardown revealed two new Google handsets with codenames 'Bonito' and 'Sargo', where the former is speculated to have a Qualcomm Snapdragon 710 SoC, while the latter is expected to have a Snapdragon 670 SoC.

Some purported camera samples of the Pixel 3 Lite also emerged last week that highlighted its indoor and outdoor imaging capabilities. The camera samples essentially showed that the handset captures a good amount of detail in dim-lit as well as heavy overcast conditions. An image with a widescreen aspect ratio also surfaced.