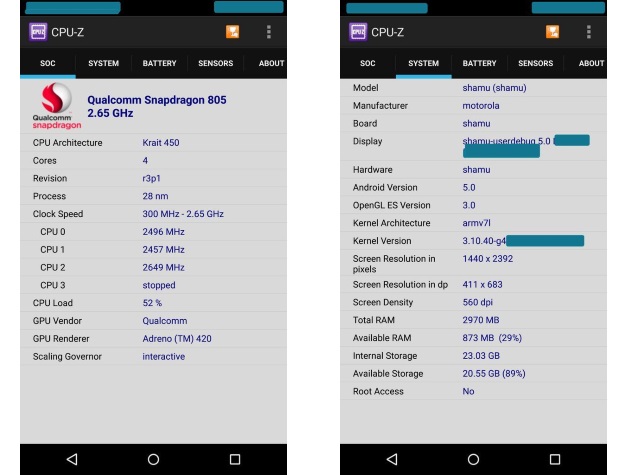 Google's much-anticipated next Nexus smartphone, after allegedly being spotted in Geekbench test results with impressive scores, has once again been leaked in mobile benchmark results - this time on CPU-Z.

The leaked Motorola Shamu screenshots from CPU-Z - which is an app that collects data such as SoC function, system information, battery details and sensors - corroborate some of the rumoured specifications of the Nexus 6 or Nexus X.

First spotted by Gadgetz Arena, the CPU-Z benchmark test results for the yet-to-be-announced Motorola "Shamu" - thought to be the codename of the next Nexus smartphone - list a quad-core Snapdragon 805 clocked at 2.65GHz; 3GB of RAM, and a screen resolution of 1440x2560 (QHD) pixels, all of which are in-line with earlier reports. Other innards listed on the leaked screenshot include an Adreno 420 GPU and 560dpi screen density.

Previously rumoured specifications of the Nexus 6 aka Nexus X had included a 5.9-inch display offering a pixel density of 496ppi, a 13-megapixel rear camera with OIS with a "new dual-flash ring configuration"; a 2-megapixel front-facing camera, and a larger than 3200mAh battery.

The purported screenshots from CPU-Z have been leaked courtesy of a Twitter user named r0fl, who has also tweeted about the device using hash tags for Motorola, Nexus, Android, Google, and massive.

The next Nexus smartphone, thought to be manufactured by Motorola in partnership with Google, is widely expected to be released in mid-October (October 15 or 16). Additionally, Google is also rumoured to debut the next Nexus tablet believed to be manufactured by HTC - the rumoured Nexus 9 was 'confirmed' by an HTC executive on Wednesday, while it was pictured by a tipster recently - along with the general release of Android L.