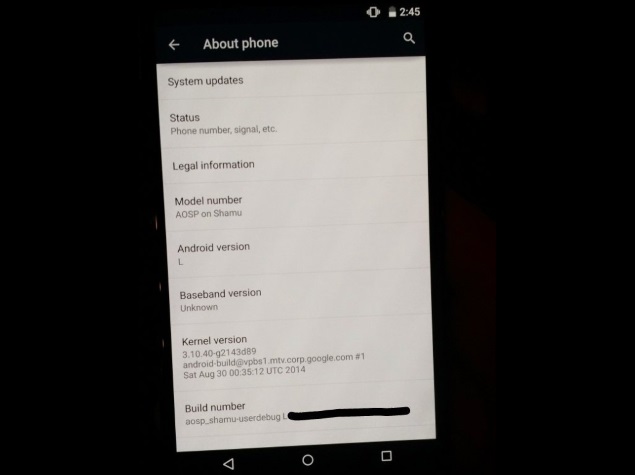 Soon after being pictured alongside LG's flagship G3 smartphone, Google's much-anticipated next Nexus smartphone, likely to be called the Nexus X (and not Nexus 6 as previously rumoured) has leaked yet again in a new image.

The new leaked image comes courtesy a commenter named 'shamushamwow' on Droid Life site. The device, thought to be the rumoured Nexus X, is seen running an AOSP (Android Open Source Project) build of Android L in the leaked image. The model number of the device in the leaked image is seen listed as 'AOSP on Shamu' tipping that it might be from a prototype device.

Unfortunately, the new leaked image has been shot in dark and the alleged Nexus X device itself is not visible in the image, though we get a glimpse of the software it will run.

Based on the earlier leaks, the alleged Nexus X is expected to be an elongated version of the second-generation Moto X, and come with a 5.9-inch display.

Some of the purported specifications of the next Nexus phone that were leaked on Wednesday include a 5.92-inch QHD display with a resolution of 1440x2560 pixels (translating to an impressive pixel density of 498ppi), a 3200mAh battery; a 13-megapixel rear camera with 4K video recording capability; a 2-megapixel front camera; a Snapdragon 805 processor, and 3GB of RAM. Reports also pointed to a possibility that Google might debut two Nexus smartphones this year.

The large 5.9-inch Nexus X or Nexus 6 is in-line with rumours from last month, when Google was said to be planning to launch a 5.9-inch Nexus X; then decide whether to re-purpose a 5.2-inch Moto S handsets to launch as another Nexus later in the year.

There have been multiple reports claiming that the next Nexus smartphone is being made by Motorola and will be based on the design of the new Moto X. However, one of the possibilities also exists that it could be a Google Play edition of the Moto X, which will be launched sometime later this year.

Google may have been quiet about the launch of its next Nexus smartphone, rumoured to be built in partnership with Motorola; however, recent reports have tipped mid-October (October 15 or 16) launch time frame for the device.

Reports also suggested that the next Nexus tablet, believed to be manufactured by HTC, will also be unveiled alongside the rumoured Google Nexus X.