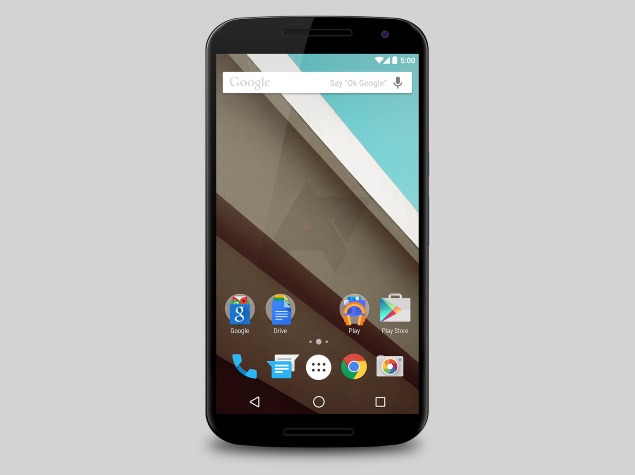 A new mock-up image of the next Nexus smartphone has surfaced on the Internet, ostensibly based on new leaked details about the yet-to-be-revealed smartphone that's expected to be called the Nexus 6 or Nexus X.

The mock-up was posted by Android Police's Liam Spradlin, who noted, "Based on new information, I've put together this image that depicts - as faithfully as possible - what the Nexus 6 will look like," adding that he can "confirm it will be a 5.9-inch device called the Nexus 6."

In-line with previous rumours, the Nexus 6 aka Nexus X mock-up looks like an elongated version of the second-generation Moto X. Also visible are dual front speakers, while the power and volume rocker button placement is slightly different compared to Moto X (Gen 2), and has been moved down a bit - which can be credited to the larger form factor.

The Nexus 6 aka Nexus X mock-up image also shows revamped icons on an Android L home screen, including the dialler, Chrome, and Play Store. There's also what appears to be the Messaging app - speculated to include Hangouts as an option. Android Police also notes the presence of folders, such as one for Google apps, one for the the Drive suite of editing apps, and one for Play - which may include either games or apps downloaded from Google Play.

The mock-up of the Nexus 6 aka Nexus X also has no demarcated status bar on top, with Wi-Fi, network signal and battery indicators visible above the background and sporting a solid look in-line with Android L's Material Design philosophy.

Android Police also claims to be able to confirm the specifications of the Nexus 6 aka Nexus X, which are in-line with previous reports. It's said to bear a 5.9-inch QHD 496ppi display, a 13-megapixel rear camera with OIS with a "new dual-flash ring configuration," a 2-megapixel front-facing camera, and a larger than 3200mAh battery. Previous reports had indicated the next Nexus will feature a Snapdragon 805 processor, and 3GB of RAM.

Android Police's mockup does not feature the sides or the back of the smartphone, but the website claims the "edge of the device will have the same aluminium frame as the new Moto X." The report also notes the Nexus 6 aka Nexus X will be compatible with Motorola's new turbo charger for fast charging.

Reports have for a while indicated that Google is partnering with Motorola for the next Nexus smartphone, and recent reports indicate it may be released in mid-October (October 15 or 16).

In addition to the Nexus 6 aka Nexus X, Google is also expected to announce the next Nexus tablet believed to be manufactured by HTC - the rumoured Nexus 9, along with the general release of Android L.

Reports also hinted at a possibility that Google may debut 2 Nexus smartphones this year.

On Monday, an alleged Nexus 6 aka Nexus X was seen running an AOSP (Android Open Source Project) build of Android L in another leaked image. The model number of the device in the leaked image was seen listed as 'AOSP on Shamu' tipping that it might be from a prototype device.

We have been already treated with a leaked image that showed the Google's much-anticipated next Nexus smartphone pictured alongside LG's flagship G3 smartphone.