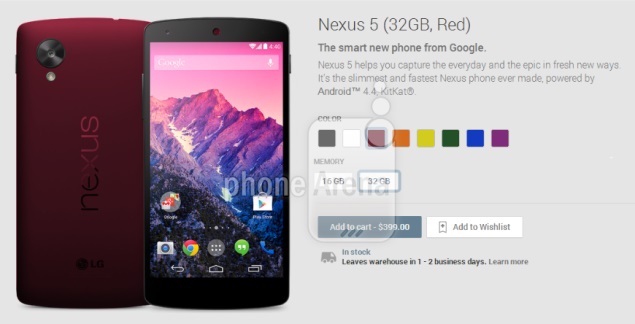 Google launched its much-awaited Nexus 5 smartphone in November at Rs. 28,999; however the device reached Indian shores in the third week of November. Google Nexus 5 is the platform lead device for Android 4.4 KitKat.

The Nexus 5 comes with a 4.95-inch full-HD IPS display with a resolution of 1080x1920 pixels and boasts a pixel density of 445ppi, apart from sporting Corning Gorilla Glass 3. It is powered by a 2.26GHz quad-core Qualcomm Snapdragon 800 processor alongside 2GB of RAM. It sports an 8.0-megapixel rear camera with Optical Image Stabilization (OIS) and a 1.3-megapixel front camera. It comes in 16GB and 32GB storage options, with Black and White colours to choose from. Unfortunately, much like Nexus 4, the Nexus 5 does not support expandable storage. Connectivity options include Wi-Fi, Bluetooth, NFC and 3G. The Nexus 5 also support wireless charging and comes with dual microphones.