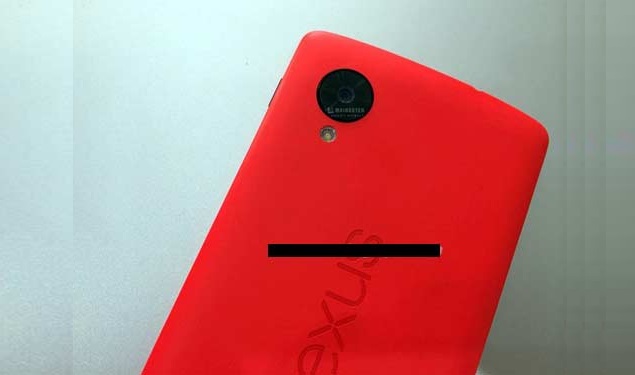 According to a Vietnamese publication, Google plans to introduce the alleged Red colour variant of the Nexus 5 alongside a Yellow colour model soon. The site claims that the alleged Red Nexus 5 variant spotted in the image is a sample model and is not a commercial product.

Further, the publication claims that the Mountain View giant can introduce the alleged Red and Yellow Nexus 5 models in February or March this year in Vietnam.

However, there is no word on the international availability. The leaked Red colour Nexus 5 image reveals the device's back panel with the usual Nexus logo branding embedded at the back in the middle.

Thursday's leaked video showed the Nexus 5 smartphone in a total of eight colour variants, which included the already available Black and White models, along with yet-to-be-announced Blue, Green, Orange, Purple, Red and Yellow. The purported video shows the Nexus 5's Google Play store listing with eight colour options. The leaked video was later proven to be fake however.

It's worth pointing out that Google has not launched any Nexus device in multiple colours except the conventional Black and White colours.

Google launched its much-awaited Nexus 5 smartphone in November at Rs. 28,999; however the device reached Indian shores in the third week of November.

Google Nexus 5 was the first device to run Android 4.4, which brings a new dialler that automatically suggests to people the most likely call; as well as Caller ID by Google that matches an incoming phone number to a business even if that number isn't stored in the contact list. Users can send and receive text messages directly from Hangouts, and Hangouts for Android now supports location sharing.