Google Nexus 4 may soon get a white colour option 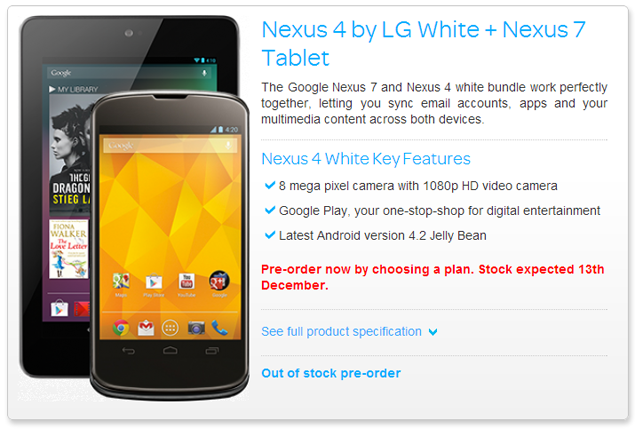 Google Nexus 4 may soon be getting a white variant, according to report on phandroid.com.

As per the report, the white version has been listed on the UK's online retailing website TalkTalk as a combo deal with Google Nexus 7 tablet. TalkTalk is offering to pre-book this combo deal and claims that it will get the stock by December 13, 2012.

Just a few days back a white version of Google Nexus 4 was listed on Carphone Warehouse site (another UK online retailer), so it seems like this device might be soon hitting the shelves.

The Nexus 4 phone boasts a 4.7-inch screen with 1280 x 768 pixel resolution. It has Qualcomm Snapdragon S4 Pro processor on-board and runs on Android 4.2 (Jelly Bean). For camera, there is a 8-megapixel rear camera and 1.3-megapixel front camera. The other features of the smartphone include 2GB RAM and 2100 mAh battery.

Google had started selling Nexus 4, through its Google Play store from November 13, 2012. Only minutes after the launch, the smartphone was declared as sold out in US, Britain, Germany and elsewhere, and consumers were complaining of frustrating experiences at the inundated online shop.

The smartphone costs $299 on Google's Play Store, though the cost is said to be heavily subsidised by Google. Earlier, Nexus 4's purported €599 price tag outside Google Play drew plenty of criticism from retailers and users alike. Many angry users protested this exorbitant price increase by venting their frustration on LG's Facebook page, while some retailers reportedly refused to carry the phone at the inflated price tag.