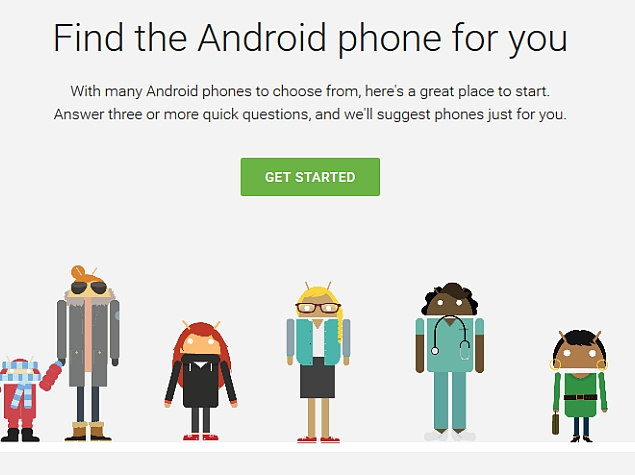 With the innumerable Android smartphone launches every week, users looking for a new phone are always in tight spot about which handset to buy, Google now has the answer. The search giant has unveiled a new tool that recommends handsets to users based on their preferences, gleaned by making users answer a few questions.

The "Find the Android phone for you" tool is part of the company's Android site. Describing the tool, Google says, "With many Android phones to choose from, here's a great place to start. Answer three or more quick questions, and we'll suggest phones just for you."

The tool asks users to choose what their next "Android phone is for", giving 12 options - Taking photos; Listening to music; Being productive; Social media; Gaming; Watching videos; Being on the go; Staying fit; Texting & instant messaging; Talking; Web browsing; and Expressing my style. Depending on their selection, users are shown further questions essentially asking them to detail how many hours a day they spend in their chosen use case. Users have to choose at least three options, and then click on "Show Me Phones" to view the recommended handsets.

Users in the results page can also filter the smartphones based on carriers, sizes, prices, and latest phones. If unfiltered, the results show flagship handsets like LG G4, Samsung Galaxy S6/ Galaxy S6 Edge, HTC One M9, and more. Each handset in the results has reasons for the selections shown, or rather its best attributes, such as 'social multi-tasker' and 'balanced speed & endurance.' It is not known just how many brands Google's database includes. So while the results are limited, the tool can help lead user in the right direction.

Google recently showcased its Android M mobile operating system during its I/O conference last month. Several features have also been recently showcasing a number of new features to make the users' overall experience more productive. Google this week at the SMX Paris Search Conference showed what is said to be Location-Aware Search or geocontextual search. It also rolled out "Touch to Search" feature for the Chrome browser on mobile devices. An ability to deliver real-time public transit information in the Google Maps app has also been given.