Phones running Android version 2.3.7 and lower will get a “username or password error” whenever users try to sign in to any Google apps loaded on the phone. 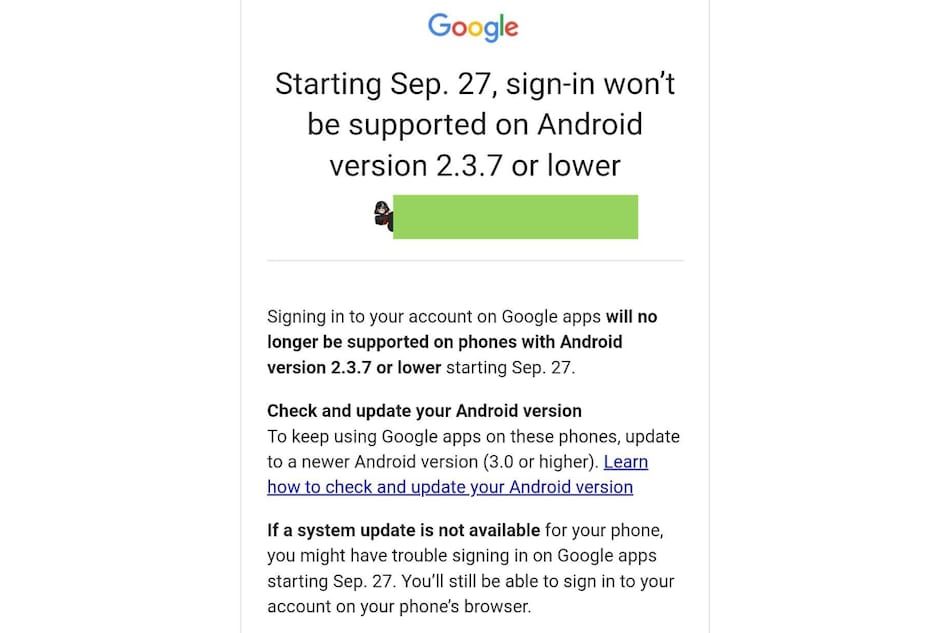 Google will no longer support sign-ins on Android phones running on version 2.3.7 or lower. This change will come into effect starting September 27, an email sent by Google to users reveals. The email recommends users to update to at least Android 3.0 Honeycomb to continue using Google apps even after September. This will impact system and app level sign-in, but users should continue to be able to sign in Gmail, Google Search, Google Drive, YouTube, and other Google Services via the phone's browser.

In its report, 9to5Google shared a screenshot of the email sent to users who are likely to be impacted by this change. Users on very old versions of Android are likely to be very few and Google is obviously doing this to help protect user data and maintain account security. Beginning September 27, users running on Android version 2.3.7 and lower will get a “username or password error” whenever they try to sign-in to any Google apps loaded on the phone.

These emails look to be a warning sign for these few users who are still using the archaic software versions, urging them to either update their software or switch phones.

Essentially, there will be no workaround left for Android v2.3.7 and lower software users, and it is best to look for alternate options to continue hassle-free use of Google apps and services.