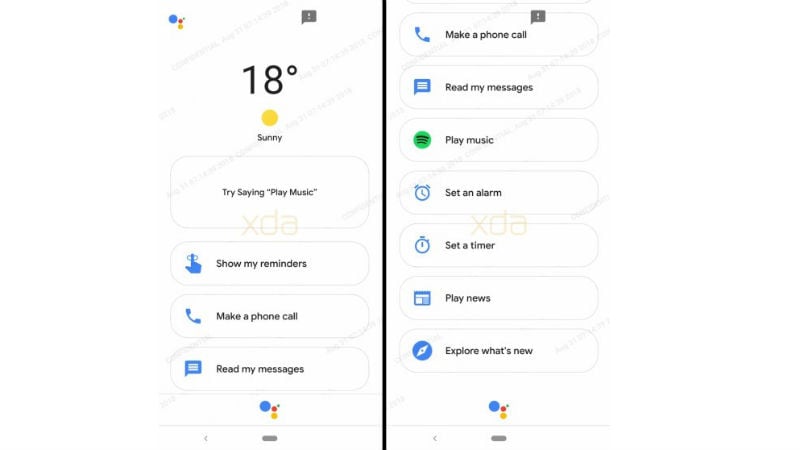 This is the Google Assistant UI for the Pixel Stand

Google will soon launch new smartphones in its Pixel lineup, expected to be called Pixel 3 and Pixel 3 XL. While the details of Pixel 3 XL have been leaking from all corners of the Internet, its smaller sibling Pixel 3 was also recently spotted online. At the moment, there is very little that is not known about the specifications and design of the two handsets. However, as per several leaks, one of the key features that are expected in the lineup is wireless charging. Google has been rumoured to launch a wireless charging stand alongside the two phones this year, expected to be called the Pixel Stand. Meanwhile, a new report has managed to leak the special UI in Google Assistant that may launch when users dock the Pixel 3 or 3 XL into the Pixel Stand, making the entire setup similar to the Google Assistant-based Smart Displays.

According to an earlier report, Google's new product called Pixel Stand will come with notable features like Google Assistant integration. The Assistant on the Pixel Stand will reportedly be able to respond to queries, give out personal info and your daily schedule, even if your phone is locked. Now, as per the latest images of the UI discovered by app developer Keiron Quinn via XDA Developers, the virtual assistant will be able to carry out quite a number of tasks. He managed to activate the Pixel Stand UI by sending a special intent to the Google app and enabling a particular flag. The interface is a cross between Assistant on phones and the new Assistant Smart Displays. According to the Google app, "Your Assistant can use your personal info to make suggestions, answer questions, and take actions for you when your phone is locked and on your Pixel Stand."

The Google Assistant UI appears to be under development and the minimalistic white background reminds us of Google's other recent apps. The temperature view is present at the top, followed by weather features. Right under that, Google has placed a 'Try Saying' suggestions box. Interestingly, it does not mention the words 'Hey Google' or 'Ok Google', and the tap Assistant icon is also missing at the bottom.

Following these, there are actions such as 'Make a phone call' and 'Set a timer'. While most of the icons are generic, the 'Play Music' option features Spotify's icon. Folks at XDA Developers noted that the new user interface was activated using the latest beta version of the Google App, and the company may add more new features or changes before the official launch.