While Gionee's current contender for the world's slimmest smartphone crown, the Gionee Elife S5.5 (Review | Pictures), does certainly make an impression with its 5.5mm thickness - it looks like the company is looking to make an even slimmer phone before anyone challenges its claimed record. A 5mm-thick handset has been spotted at the China-equivalent of the FCC, called the Gionee GN9005.

Notably, with the launch of Gionee Elife S5.5, the firm managed to beat the record previously held by Vivo X3 by 0.25mm. To give a better idea of the yet-to-be-announced Gionee GN9005's 5mm thickness, the Apple iPhone 5s and Samsung Galaxy S5 measure 7.6mm and 8.1mm respectively in thickness. However, with the slimness, Gionee seems to be shedding some of the high-end specifications on the GN9005 that were found on the Elife S5.5. 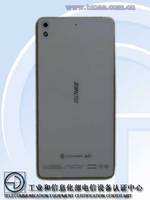 The Gionee GN9005, which appears not to be the final name of the smartphone, was spotted listed Tenaa with specifications.

According to the Tenaa listing, the Gionee GN9005 sports a 4.8-inch HD (720x1280 pixel) AMOLED display. The smartphone is also seen running on Android 4.3 Jelly Bean out-of-the-box and powered by a 1.2GHz quad-core processor (unspecified) paired with 1GB of RAM. While the handset comes with 16GB of inbuilt storage, it also features an 8-megapixel rear and 5-megapixle front-facing camera. A 2050mAh battery backs the handset.

With the listing smartphone seems to be headed first for China Mobile, and is expected to be 4G LTE network compatible. As expected, the Gionee GN9005 is yet to be allotted a price tag. Also, there is no word on its launch time frame.

To recall, the Gionee Elife S5.5 is a single-SIM smartphone that runs the company's Amigo 2.0 UI on top of Android 4.2 Jelly Bean. However, earlier this month the smartphone was said to have been receiving the Android 4.4.2 update.

Some of the other key specifications are 5-inch Super AMOLED (1080x1920 pixels) Plus display, 1.7GHz octa-core CPU, 2GB of RAM, 13-megapixel rear and 5-megapixel front camera, 16GB of internal storage with no expandability options, and 2300mAh battery. The handset was first unveiled in February, ahead of the Mobile World Congress 2014 event.