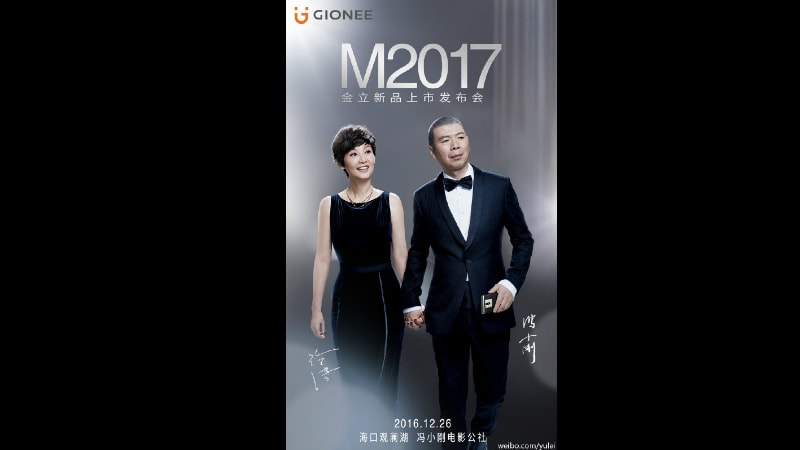 Last week, Gionee teased a 7000mAh battery smartphone, hinting that launch is imminent. Now, the Chinese manufacturer in a post on Weibo has announced that the Gionee M2017 will be unveiled on December 26 at an event in China.

The smartphone's big highlight is the mammoth battery capacity of 7000mAH. The event will be held at Haikou Mission Hills in Hainan, China, where the Gionee M2017's pricing and availability will be unveiled. As per leaks, the Gionee M2017 is tipped to sport metal edges on four sides with the power and volume buttons housed on the right edge of the smartphone. The back of the smartphone sports a rubber-like textured finish.

The Gionee M2017 was spotted on the certification site as well, where most of its specifications were leaked. It is expected to feature a 5.7-inch (1440x2560 pixels) QHD display. The smartphone is expected to be powered by a 1.9GHz Qualcomm Snapdragon 653 octa-core processor paired with 6GB RAM and Adreno 510 GPU. The handset is also said to pack a massive 128GB of inbuilt storage.

The Gionee M2017 is likely to run on Android 6.0 Marshmallow, support dual-SIM cards, measure 155.2x77.6x10.6mm, and weigh 230 grams. The smartphone will feature a dual-rear camera setup with a 12-megapixel sensor and a 13-megapixel sensor at the back with LED flash. At the front, there is tipped to be an 8-megapixel selfie camera as well.

There's fingerprint sensor housed presumably underneath the Home Button, and the 7000mAh battery is expected to support fast charging. Other connectivity options include GPS, Bluetooth v4.2, 4g LTE support, and Wi-Fi 802.11 ac. There is no word on if Gionee plans to launch the smartphone in other markets outside of China as well.