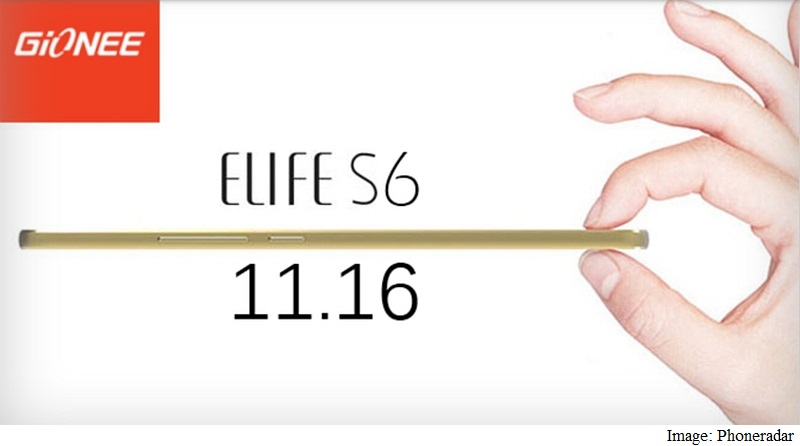 Gionee, after launching its Elife E8 smartphone in India earlier this month, has now sent out invites for the launch of a new handset - Elife S6. The smartphone would be fourth in the 'Elife S' series after Elife S7, Elife S5.1, and Elife S5.5.

As per the invites posted on Weibo and sent to media outlets (via via Phoneradar), the Gionee Elife S6 launch is scheduled for November 16. Unfortunately, no other details are known about the smartphone as of now. However, since the company's Elife S series devices are known for its slim design and build, we can expect the Elife S6 to flaunt a slim body as well.

The upcoming Gionee Elife S6 is expected to be the same handset which went through Tenaa certifications recently, codenamed GN9007. The Tenaa listing reveals the smartphone to feature a 5-inch Amoled display with HD (720x1280 pixels) resolution, octa-core MediaTek SoC clocked at 1.3GHz, 2GB RAM, 16GB expandable storage, 13-megapixel rear camera with LED flash and 8-megapixel front-facing camera. The handset runs on Amigo 3.1 based on Android 5.1 Lollipop. In addition, the device measures 6mm in thickness, corroborating with the Elife S6 naming convention. However, more details will surface as the launch date comes close.

Gionee earlier this month launched its first made in India smartphone, the Gionee F103, manufactured by Foxconn in its Visakhapatnam factory.

The company launched its Elife E8 smartphone this month in India priced at Rs. 34,999. The smartphone's highlight is its 24-megapixel rear camera that with software can stitch together and produce images up to 120 megapixels in resolution.